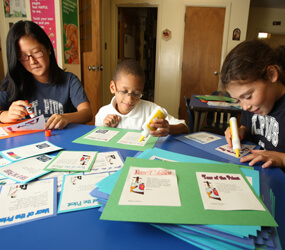 During his last daily Mass as pastor of St. Michael, Overlea, in June, Father James Proffitt encouraged parishioners to pray for priests.

He never imagined some, like Mary Hollingshead, would expand on those hopes and launch a massive prayer campaign that is stretching across the archdiocese.

Hollingshead is coordinating the effort – recruiting Catholics to commit to praying for one priest a few minutes every day throughout the Year for Priests. Her goal is to have someone pray for each of the 538 archdiocesan and religious order priests who serve within the Archdiocese of Baltimore.

“It’s wonderful when people rally round their priests,” said Father Proffitt, now the pastor of St. John the Evangelist in Severna Park.

Hollingshead already has 426 priests covered and is hoping to find volunteers in the next week to pray for the remaining 112 priests.

“It’s so important in these difficult times to let our priests know someone is praying for them,” Hollingshead said. “There are fewer and fewer priests, which makes it more important than ever to let them know they are loved.”

Hollingshead said prayers are needed to keep priests holy and to “prevent them from being attacked by Satan.”

She designed special prayer cards for the campaign, which she distributes electronically.

Children in the school made their own prayer cards, Brooks said, which will be distributed at parish Masses the first weekend in October.

“I think it’s a good way to help us appreciate our school and our priests,” said 8-year-old Nasir Asli, a St. Pius X third-grader.

Molly Burnham, an 11-year-old sixth grader, said the prayer campaign is special to her because her uncle is Father Martin Burnham, pastor of St. Andrew by the Bay in Annapolis.

“It encourages me to pray for priests in other parishes,” she said.

“I think a lot of what we do as priests depends a lot on the prayer of others,” Father Proffitt said. “It’s not just what we do on our own strength.”

He added that priests need prayers to remain faithful to their promises in the face of increasing demands. They also need to be reminded of the importance of prayer in their own spiritual lives, he said.

Hollingshead hopes those who participate in the campaign will be open to the Holy Spirit.

“By praying for priests,” she said, “it might plant the seed for future vocations.”