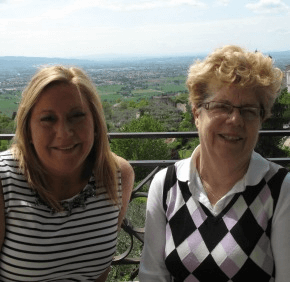 By Paul McMullen
pmcmullen@CatholicReview.org
ASSISI, Italy – With millions making their way to Vatican City for the April 27 canonizations of Blessed John XXIII and Blessed John Paul II, you can’t walk five paces without coming across a religious man or woman at Rome’s Leonardo da Vinci International Airport or strolling this historic city, which is about 115 miles northeast or Rome.
Kathy Mattingly is right at home.
Her grandfather was the youngest of 11 children in a family that gave St. Patrick Parish in Mount Savage more than its share of vocations. One of his brothers became a Redemptorist priest, and three of his sisters took vows, one as a Daughter of Charity, two others as School Sisters of Notre Dame.
On her mother’s side, aunts include Ursuline Sister Kathleen Neely, who’s been serving in Peru for 40 years, sent by her order in response to John XXIII’s call for every religious order to send missionaries out into the world.
A parishioner of Our Lady of the Mountains in Cumberland, Mattingly is rooming with her sister-in-law, Connie Mattingly, a parishioner of St. Michael, Poplar Springs, on a pilgrimage sponsored by the Archdiocese of Baltimore and the Catholic Review. Her son, Joseph, will graduate next month from The Catholic University of America in Washington, D.C.
“Maybe he’ll become a priest,” Kathy Mattingly said.
She taught religion and math for 36 years at Catholic schools in Allegany County, retiring from Bishop Walsh School in 2006. Her first trip to Italy came in 1964, with a group from what is now Notre Dame of Maryland University that was led by one of her great-aunts, School Sister of Notre Dame Alba Mattingly.
Still with a thirst for learning, Mattingly was spiritually moved the morning of April 23, when the pilgrimage’s itinerary featured several hours at the Basilica of St. Francis.
“This has far exceeded my expectations,” Mattingly said, “and one of the things I love is the devotion of daily Mass. I love it every day, but I especially loved it this morning when monsignor asked us to pray for the children.”
At the basilica’s St. Catherine Chapel – “Capella S. Caterina” – Monsignor Robert J. Jaskot, pastor of Holy Family Catholic Community in Middletown, asked that the Mass’s intention was for “your children, your grandchildren, the children of this area and children all over the world, and all of the challenges they face.”
At the basilica – where Francis was canonized in 1228, just two years after his death, ­ pilgrims viewed the many historic frescoes by Giotto and Cimabue in its upper and lower churches, and paused in the sarcophagus to view his tomb, what a guide described as “the only simple thing in the church.”
Later, pilgrims toured the Basilica of St. Clare, including the crucifix from San Damiano where St. Francis heard a voice say “Go Francis, repair my church, which is in ruin.”
Also see:
Pilgrims follow saints’ examples to Rome
Sudan: ‘The place where God weeps’
The risen Jesus, not power or money, is the source of life, pope says
PrevNext