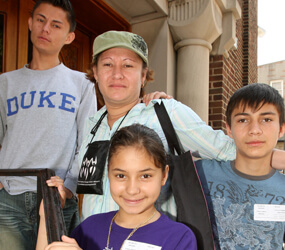 “If God wants me to leave, I’ll leave,” the 16-year-old son remembered his mother, a native of El Salvador, saying.

After eight years in the U.S., De La O will be deported to El Salvador July 22.

“I told my mom I don’t want to go back there, but if that’s the only option she has, I’m going with her,” Carlos said. “I like it here. All my brothers and sister want to stay here.”

Carlos and siblings Selvin, 15, Riccy, 10, and Esau Portillo, 5, will sacrifice their American educations and friends to follow their mother to their homeland, where they face a harsher life.

The three oldest children, born in Honduras, came to the U.S. in 2006 to join their mother. Esau, her only U.S.-born child, is a student at Archbishop Borders School, along with Selvin and Riccy. Carlos is a sophomore at St. Frances Academy.

“I brought them here to give them education, culture and manners,” De La O said through Carlos. “In my country … most of the people don’t have anything. I want them to study so they can be a better person.”

De La O, 33, traveled with a contingent from the Archdiocese of Baltimore to Washington May 1, when a number of major U.S. cities were the site of immigration rights rallies protesting Arizona’s new Support Our Law Enforcement and Safe Neighborhoods Act. In July, the law will set into place tough new standards.

Sister for Christian Community Patricia Ann Rogucki has been an advocate for the De La O and her family since 2006. As a catechist for Our Lady of Pompei, she taught Carlos. Sister Patricia Ann, who has served in El Salvador for 20 years through various missions, said De La O has much to offer.

“She is a very intelligent woman,” Sister Patricia Ann said. “She is learning English. Her writing isn’t that good, but she’s working on it. She’s a very bright woman – extremely spiritual.”

De La O was raised by her grandmother in El Salvador, where she received no education and clothes and shoes were considered luxuries. Moving to Honduras at a young age to work, she met and married an older man. He is the father of her three oldest children.

De La O told Sister Patricia Ann that she paid someone to get her across the U.S. border in 2002.

“It was really hard to come here,” De La O said. “I lived in the shadows. I came here to work … I didn’t come here to kill or steal or do something bad. When I work, it’s only to support (my children).”

De La O has worked in restaurants, babysat, cleaned and painted. Before her children joined her in the U.S., she sent money to her family. Her husband had another relationship; De La O remarried here and her oldest children came to live with her.

Soon after she arrived in the U.S., De La O was fingerprinted. Applying for legal status, she instead received a notice for a deportation hearing. She attended four in the last year.

As De La O prepared to attend the Washington protest, Sister Patricia held a shirt that said, “Deport me instead.”

Father Luigi Cremis, associate pastor of Our Lady of Pompei, said De La O has been a contributor to the parish

Immigration reform might be too late for the family, as De La O’s scheduled deportation is two months away.

“I hope they can make a new law and we can stay,” Carlos said. “Give us something – some hope.”