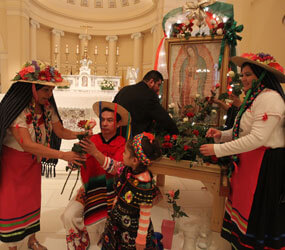 Octavio Colin is a father of nine who recently celebrated his 25th wedding anniversary. The Mexican immigrant believes Our Lady of Guadalupe is the reason he’s alive today to enjoy watching his family blossom.

Colin, a parishioner of the Catholic Community of St. Michael and St. Patrick in Fells Point, was in a truck that narrowly avoided falling into a river. He prayed to Mary to survive and emerged unscathed.

“I was born again that day,” Colin said.

Hundreds of Latin Americans filled the Basilica of the National Shrine of the Assumption of the Blessed Virgin Mary Dec. 12, the Feast of Our Lady of Guadalupe. A Mass and celebration there was filled with the sweet smell of roses on a day of pride, faith and recollection.

Latin Americans held vigils at many parishes the night before in their parishes. Some re-enacted the Virgin Mary appearing to St. Juan Diego in 1531 in Mexico City.

As the story goes, St. Juan Diego told a local bishop of Mary’s appearances to him unsuccessfully. After another conversation with Mary, he returned to the bishop with roses in his cloak. A startlingly precise image of Mary appeared in place of the roses on the cloak.

The cloak was revered as a miracle and violent cultures in the region converted to Christianity upon witnessing its power. The cloak remains on display and people from around the world have made pilgrimages to see it.

After Mass, Archbishop O’Brien said the image had long-ranging impact.

“That’s changed not just Mexico, but all of America, north and the south,” he said. “It really heightens their faith and stresses the importance of faith in the Spanish community and Spanish-speaking community. They work hard, they struggle, they raise good families and we want to do everything we can to encourage faith be part of those families.”

Maria Johnson, the archdiocese’s director of Hispanic Ministry, said Latin Americans personalize Mary’s appearance to Juan Diego. She said the image makes them feel as if she has remained with them in their lives.

“It’s a message of redemption,” Johnson said. “It’s her presence, message and just expressing her own face. We love her so much.”

Several people helped carry an image of Our Lady of Guadalupe inside the Basilica to the altar. Outside, children and teens in the group La Danza Guadalupana danced and chanted next to another version of the image.

Children processed into the church carrying roses to the image in front of the altar. Tradition was beginning anew for Latin Americans.

Colin said Our Lady of Guadalupe is about unwavering faith.

For a video report of the celebration, visit CatholicReview.org/palmerblog.