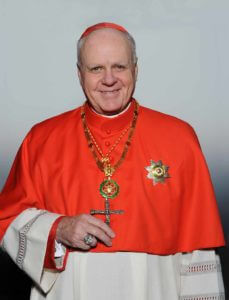 Motto: Pastores Dabo Vobis “I will give you shepherds” –Jeremiah 3:15

Edwin Frederick O’Brien was born April 8, 1939 in the Bronx, New York, son of Mary Winifred and Edwin Frederick O’Brien, Sr. He was one of three children, including brothers Ken and Tom (now both deceased). He attended St. Joseph’s Seminary, Dunwoodie, where he received his Bachelor of Arts degree in 1961, a Master of Divinity in 1964, and a Master of Arts degree in 1965. He was ordained a priest of the Archdiocese of New York on May 29, 1965 by Francis Cardinal Spellman.

His first assignment was as a civilian chaplain at the United States Military Academy at West Point, New York. He would later be commissioned to become a military chaplain and in 1970, he officially became an Army Chaplain with the rank of Captain, serving with the 82nd Airborne Division. From 1971 to 1972, he served a tour of duty in Vietnam with the 173rd Airborne Brigade and then the 1st Cavalry Brigade. From a base of operations in the middle of a jungle, he and a Protestant minister flew by helicopter to defensive outposts where they would provide for the spiritual needs of the soldiers.

In 1973, he left the military and began his doctoral studies at Rome’s Angelicum University. While preparing for his doctorate in sacred theology, Archbishop O’Brien was a graduate student at the Pontifical North American College. He studied moral theology and completed his doctoral dissertation, entitled The Origin and Development of Moral Principles in the Writings of Paul Ramsey, in 1976.

He returned to continue his service to the Archdiocese of New York, serving as vice-chancellor for the Archdiocese and associate pastor at St. Patrick’s Cathedral. In 1979 he coordinated Pope John Paul II’s visit to New York and for two years served as communications director for the Archdiocese. In 1986, he was elevated to Monsignor and served two terms as rector of St. Joseph’s Seminary from 1985-1989 and 1994-1997. From 1990-1994, he served as rector of the Pontifical North American College in Rome.

On February 6, 1996, he was named Auxiliary Bishop of New York and bishop of the titular see of Thizica. He was consecrated by Cardinal John O’Connor at St. Patrick’s Cathedral on March 25, 1996. On April 7 of the following year, he was named co-adjutor bishop for the Archdiocese for the Military Services and on August 12, 1997, he succeeded as archbishop. The Archdiocese for the Military Services serves 1.5 million Catholics including all U.S. Armed Forces and their families as well as 170 Veterans Administration hospitals and U.S. Government employees overseas. From September 2005 to June 2006, he served as the Holy See’s coordinator for the Papal Visitation of Seminaries and Houses of Priestly Formation and in 2007 was appointed a member of the Congregation for Catholic Education and Seminaries.

On July 12, 2007, his appointment as Archbishop of Baltimore by Pope Benedict XVI was announced. He succeeded Cardinal William H. Keeler, who had served as the 14th Archbishop of the nation’s oldest diocese from 1989 to 2007. Archbishop O’Brien was installed on October 1, 2007.

During his tenure as the 15th Archbishop of the nation’s oldest Catholic diocese, Archbishop O’Brien focused the Church’s ministry in several key areas, including the promotion of vocations, fostering a culture of respect for the dignity of every person, improving the quality of life in Baltimore City, and to help Catholics in the Archdiocese—young, old, and those who may have left the Church—renew and strengthen the bonds of their faith.

Confronted by the disturbing trend of declining Catholic school enrollment, Archbishop O’Brien initiated an unprecedented review and strategic planning process for the entire school system. These efforts led to the creation of a long-term strategy for strengthening Catholic schools. As well, a number of new educational initiatives to help Catholic schools remain competitive were developed.

On August 29, 2011, Pope Benedict XVI appointed Archbishop O’Brien the Grand Master of the Equestrian Order of the Holy Sepulchre of Jerusalem. His predecessor, Cardinal John Foley, resigned the post in February, 2011 due to reasons of health.

On January 6, 2012, Pope Benedict XVI named Archbishop O’Brien to the College of Cardinals.

Pope Francis announced Dec. 8, 2019 that he accepted the resignation of Cardinal Edwin F. O’Brien as Grand Master of the Equestrian Order of the Holy Sepulchre of Jerusalem. The pope named Italian Cardinal Fernando Filoni as Cardinal O’Brien’s successor.

As required by church law, the cardinal had submitted his letter of resignation five years earlier upon turning 75. The pope chose not to accept the resignation until the end of 2019.

(Dissertation: The Origin and Development of Moral Principles in the Theology of Paul Ramsey, Angelicum U. Press, 1976)

2012: Named to the College of Cardinals by Pope Benedict XVI.

1997: Named Archbishop for the Military Services on August 12, 1997, upon the acceptance of the resignation of Archbishop Joseph Dimino by His Holiness Pope John Paul II.

Named as Coadjutor Archbishop for the Military Services on April 8, 1997 by His Holiness Pope John Paul II.

1986: Elevated to Monsignor (Prelate of Honor)

1976-1981: Vice Chancellor of the Archdiocese of New York and Associate Pastor of St. Patrick’s Cathedral