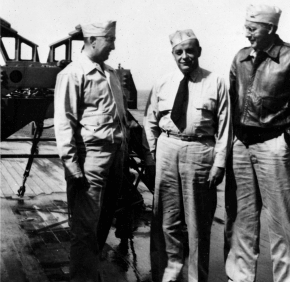 “As we approach the Holy Season commemorating the birth of the God-Man, we cannot but be mindful of the fact that it will be the first peacetime Christmas in four years. There is, consequently, every reason for us to enter into the spirit of the day more earnestly and prayerfully than ever before.”

Baltimore Archbishop Michael J. Curley included that sentiment in a message published 70 years ago in the Dec. 21, 1945, edition of the Catholic Review, four months after the end of World War II.

It was a truly blessed interlude in Baltimore and throughout the United States, as men and women whose childhoods had been disrupted by the Great Depression and then global war had discarded military uniforms, returned to civilian life and set about starting families, what became known as the “Baby Boom.”

The previous Easter Sunday, when the ship had participated in the Allied invasion of Okinawa, Father McVeigh found himself pushing the envelope of pastoral care.

“Kids you chatted with, whose confessions you heard, whose inner thoughts and ideals you know, there they are blackened, burnt corpses, or badly burnt or suffering internal injuries,” he wrote in a Sept. 14, 1945, guest article in the Review. “You pitch in and become a nurse and take orders from the doctors, helping these lads who have become a part of you for so many months.”

Just the previous Christmas, the relative security of Pearl Harbor had afforded the opportunity to celebrate Midnight Mass.

“How they sang that night,” Father McVeigh remembered of 1944. Though the war remained present, he wrote, the sailors “on the topside of a battle wagon conceived and built for destruction … praying on bended knee to the ‘King of Peace.’ ” Before the war, Father McVeigh had ministered at St. Ignatius in Baltimore. After leaving the Navy as a lieutenant commander, he returned to St. Ignatius, serving as pastor.