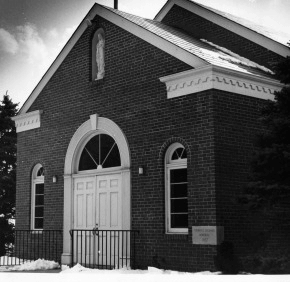 A community of religious sisters whose ministry focused on continuously praying the rosary found refuge in Baltimore 113 years ago this month after being expelled from France in a clash between church and state.

Victims of the enforcement of new association laws suppressing religious orders, 20 Dominican Sisters of the Perpetual Rosary were driven from their convent in Rouen, France, arriving in Baltimore May 11, 1903.

Most of the cloistered nuns were received at their order’s small convent on Druid Hill Avenue, where the religious community had ministered for about three years. Eight others were taken in by the Sisters of Mercy of Baltimore.

“The entire community at Rouen were turned out of their convent home with a haste that scarcely permitted them to secure absolute necessaries for their voyage to the United States,” noted a front-page report in the May 16, 1903, edition of The Catholic Mirror, predecessor to the Catholic Review. “The expenses of the voyage were borne by charitable friends, and they have been obliged to abandon their native land and religious home to seek shelter among strangers.”

“It is not surprising that these gentle daughters of once-Catholic France, who have renounced all life held dearest to consecrate themselves to prayer and sacrifice for the sins of their apostate nation, should be the victims of the renegades who now rule – in the name of the people – the land of St. Louis,” the Mirror asserted, castigating the government of French President Émile François Loubet.

Soon after arriving in Baltimore, the French sisters established their own convent in Irvington, but misfortune seemed to plague them. They suffered a devastating fire in 1907 that destroyed their chapel and convent. Reportedly unable to acclimate to Baltimore’s hot and humid climate, most of the French sisters eventually returned to Europe to establish a convent in Belgium.

A few remaining sisters joined with the American members of their order to establish a convent in Catonsville that continued a ministry of secluded prayer until the campus closed in 1980.

Some of the sisters at the Catonsville convent also established new religious foundations for their order in other parts of the country.