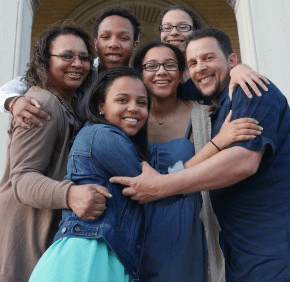 Raising quadruplets is hard work that doesn’t necessarily get any easier when they go off to college – especially when the bill arrives.

“We’re doing it on faith, to be honest with you,” said Adam Scott, father of Alexis, Brandon, Christina and Dominque, born one minute apart in order of their alphabetized first names.

The Scott family first appeared in the June 7, 2015, edition of Review in the Pew, a supplement of the Catholic Review before the newspaper became a monthly magazine.

In the article, “Love, quadrupled,” Father Donald Sterling, pastor of New All Saints in Liberty Heights, praised Scott and his wife, Lisa, for rising to a myriad of challenges.

“To see how (Lisa) and Adam have raised those children in church and in a variety of ways is awesome, and their spirit is so warm,” he said.

A year later, the quadruplets, now 18 and recently graduated from River Hill High School in Clarksville, have risen to challenges as well.

The four will begin the next chapter of their lives at Duquesne University in Pittsburgh in mid-August. Brandon and Dominque are already there, completing summer programs.

“The bottom line was that they’re not ready to separate,” Adam Scott said of his children’s decision to attend the same school.

“They didn’t want to be roommates though – that was made very clear,” he added with a laugh.

The field of prospective colleges was narrowed by Christina’s somewhat uncommon major – forensic science – which she will study, along with law, as part of a five-year master’s degree program.

Alexis is pursuing communications with a minor in psychology on a prelaw track; Brandon and Dominque will study marketing and business management, respectively.

Their father is pleased that they have settled on a Catholic university.

He acknowledged that going from four kids in the house to none will be a challenge.

“Even though it’s sad they’re leaving, the accomplishment of getting them into school and on their way is a good thing,” he added.

While they’re away, Adam and Lisa will continue to participate fully at New All Saints, where Adam was recently received into the Catholic Church.

“I’d been in the process of moving in that direction for years,” he said. “You just get to a point where you realize something is meant to be. … I decided instead of just being there, I needed to be there 100 percent.”

What does the future hold for the family?

“We’ve been blessed to this point,” Adam Scott said. “We just pray our blessings continue.”

Read more from ‘Our Back Pages’ here.