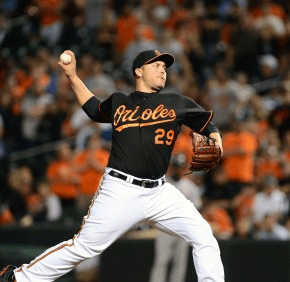 By Jennifer Williams
jwilliams@CatholicReview.org
Twenty-eight-year-old  Baltimore Orioles pitcher Tommy Hunter has been known to be goofy, playful and comedic.
Perhaps surprising to some, there is one aspect of his life which has taken on a serious note. Before getting married in January, Hunter completed RCIA training at the Cathedral of Mary Our Queen Church in Homeland and became a full member of the Catholic Church. Already baptized, Hunter received Communion from and was confirmed by Baltimore Auxiliary Bishop Denis J. Madden.
“I think it’s cool,” said the 260-pound, 6-foot-3 blond-haired baseball player as he relaxed in the Orioles dugout this spring. “You have something that you’re held accountable for and I think that’s something that’s benefiting me in my life.
“It’s a little more stability in my life,” he added.
Growing up, Hunter experienced a broad spectrum of religion. He was raised Methodist, attended the Catholic Cathedral High School in Indianapolis, Ind., and then went to college at the University of Alabama, where he met many Southern Baptists.
Hunter, a two-time Junior Olympics judo champion, began his major league baseball career with the Texas Rangers in 2007 and was traded to Baltimore along with Chris Davis in 2011. He was named the Orioles closer in 2014.
But his love of baseball began many years ago.
When he was a child and his family was driving to Atlanta to visit his dad’s side of the family, Hunter kept asking his parents, “How much farther?” When he spotted Turner Field, he asked his mom to pass him the camera and he turned it around and said, ‘One day, I’m going to play there.’”
Two years ago, he did play at the stadium.
“It was the coolest thing,” he said. “Dreams really do come true.”
Hunter met his wife, Ellen, an Ohio native who is Catholic, about three and a half years ago, and cites her for inspiring him to continue in his faith.
“My wife is definitely there to help me out and guide me along the way, which I couldn’t be more thankful for,” he said. “I was a hot mess before I met her.”
They attended Mass at the cathedral, where they connected with Monsignor J. Bruce Jarboe, the parish rector, who contacted Bishop Madden about confirming the baseball player.
Hunter’s wife, who works as an occupational therapist, served as his sponsor.
“I was impressed that it was something that was serious for him,” Bishop Madden said. “It’s one of those times when they make these commitments in their adult years and it has meaning for him. It would complete initiation into our faith and he wanted to do it. He couldn’t make the group confirmation, but he wanted to be confirmed. He was quite sincere.”
Monsignor Jarboe said Hunter seemed “very happy and eager” to receive the sacraments of initiation before entering the sacrament of vocation of marriage.
“Both he and Ellen were very delightful to get to know,” Monsignor Jarboe said. “It meant a lot to him. It was clearly a meaningful moment for him and very nice to see.”
Attending Mass together is challenging during the baseball season, but Hunter and his wife have attended St. Casimir in Canton and his wife participates in a Bible study.
“I’ve got some guys on this team who are pretty big believers in faith so it’s easy to be real with people,” Hunter said. “The things we go through, not many other people have to go through, and it’s kind of a unique setting that you get to experience with other guys.”
Hunter, whose full name is Raymond Thomas Hunter III, attended the funeral for his grandfather this spring.
“I’m the third and I couldn’t be prouder of it,” he said. “Especially hearing people speak at the funeral and the military honors. When I was little I used to all myself Raymond Hunter the turd because I couldn’t pronounce third. So it kinda makes the story a little fun, but there’s two of us now to carry on the name.”
Being a closer can be a tough job, but the jovial Hunter, who celebrated his birthday July 3,  said “looking at the glass half full is definitely a better approach to take in life than the opposite, and that’s something I’ve been trying to work hard on.”
“You’re going to have ups and downs in life and in sports, you know, your job,” he said. “You have to take the good with the bad.”
George P. Matysek Jr. contributed to this story.
Also see:
‘We had to do something’: Westminster parish launches 12-step recovery program after parishioner overdoses
Foundation of retired pitcher, wife helps children deal with grief, loss