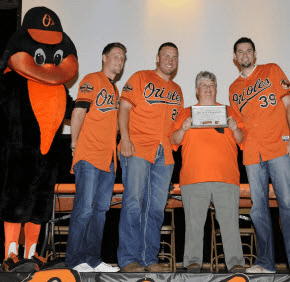 It was louder than the Roar from Section 34 in the hallowed upper deck of Memorial Stadium. Maybe louder than the screams at a Justin Bieber concert. It was L-O-U-D, and it went on for more than an hour Sept. 27 at St. Philip Neri School.

ORIOLES MAGIC had come to Linthicum as a reward for the students winning a statewide contest to see which school had the most spirit for the players with the orange cartoon bird on their caps.

Kids in grades K-through-8 raised the roof with shouts and squeals in the school gymnasium for a trio of Orioles’ ballplayers and the beloved Orioles “bird” mascot. It was an ecstatic display of love and affection for a home team in a pennant race for the first time in the lives of the kids who cheered their hearts out.

And it was not lost on the trio of relief pitchers – Troy Patton, Tommy “Big Game” Hunter and Jason Hammel – who rewarded the kids and teachers for all their hard work in turning St. Philip Neri into Camden Yards south to win the contest.

The noise inside the Monsignor Zorbach memorial gym, said Hunter, “rang your ears … it’s a fun time … a long time since they’ve seen the Orioles win.”

“Above and beyond anything I expected,” added Patton.

“I wish I would have [experienced] something like this when I was young,” said Hammel, who appeared with his wife Elissa and their almost-a-toddler son Beckett.

Sometimes it’s refreshing to get a question from a sincere 5-year-old than a jaded and hard-bitten sportswriter who has seen it all.

“How fast can you run?” asked one little boy in kindergarten.

“I don’t run too much,” laughed Hunter, a joker by nature.

“Do you like your job?” asked a first grader.

When the Oriole Bird did his celebrated O-R-I-O-L-E-S cheer – forming each letter with his body – the kids had a spelling bee they’ll never forget.

“The whole school took a day to decorate every hallway for the Orioles,” said veteran St. Philip Neri teacher Mary Ann McCormick. “We all dressed in orange and made a big O out on the field.”

Founded in 1964 and celebrating the Eucharist in a round sanctuary built a few years later, St Philip Neri sits off of Baltimore and Annapolis boulevard in northern Anne Arundel County. It beat out more than two dozen metro area schools in the Orioles-sponsored “Go Orange!” contest launched on Sept. 12.

The most apt aspect of the St. Philip effort to show that no school has more passion for the Birds than they do – including a big replica of the World Series trophy made out of sticks and an upside down kiddie pool – was the brainchild of Kate Daley, the school principal.

Not only did Daley put Orioles’ manager Buck Showalter – known for his no-nonsense approach to the fundamentals of the game – on her office door with the words “The Buck Stops Here” but she made No. 26 honorary principal for the day.

No one, agreed the ballplayers, would want to be sent to that principal’s office.

“Our manager is the most prepared man I’ve ever met in my life,” said Hunter.

“Buck would be a great principal,” said Patton. “He’s stern and he’s strict. Nobody would get out of line.”

After the players were whisked away in a white stretch limousine, the kids were let out to run around their own ball fields dressed in orange from head-to-toe, perhaps to dream their own major league dreams as Baltimore dreams of a 2012 pennant at Camden Yards.