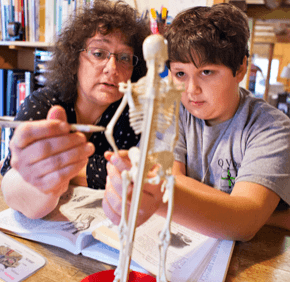 By Elizabeth Lowe
elowe@CatholicReview.org
Twitter: @ReviewLowe
When it was time for Tess Maseda to enter kindergarten, her mother, Sandra, decided to try home schooling.
That was 18 years ago, before email, the Internet and smartphones became omnipresent in most people’s lives, offering a plethora of resources on virtually any topic at one’s fingertips.
In 2004, Sandra Maseda created marylandarch.com – short for Maryland Area Resources for Catholic Homeschoolers (MarylandARCH) – a website which shares news, events, support groups and resources for Catholic home schooling families in the Archdioceses of Baltimore and Washington, and the Diocese of Wilmington.
She also started a group hosted on Yahoo.com for Catholic home-schoolers in Maryland.
“I saw the need,” said Maseda, 52, a parishioner of St. Louis in Clarksville. “It’s the biggest thing, having the support, especially for the younger ones (home schooling parents). I’ve been through this.”
Maseda home-schooled Tess, who is now 22, and son Thomas, 20, through high school. She is home schooling her third child, Anthony, 13, who is in seventh grade.
“Once people get into the support groups it’s easier,” Maseda said. “It’s networking. That’s the huge change today from when I started. Home schooling has really grown and the support system has grown.”
Home schooling online groups were particularly helpful a decade ago, when Kathy Schmidt, a parishioner of Our Lady of Perpetual Help in Ellicott City, began home schooling her three sons, now in elementary, middle and high school.
“One was the practicalities of ‘this is how we do it,’ ” said Schmidt, 46. “Those practicalities gave me ideas I would not have thought of on my own or it would have taken me a while.”
Now, Schmidt uses online resources, including the Baltimore-Washington Home Educators Yahoo group, for information about field trips and special events.
“I still need support,” she said. “It’s (a) different kind of support I get now.”
Cathy Sitzwohl, a parishioner of St. John the Evangelist in Severna Park, is active with MarylandARCH and other groups.
“They’re great for keeping in touch, asking questions, getting support,” said Sitzwohl, who home schools daughter Mary Anne, 7, and son Matthew, 6. “It’s a good way for moms to connect with other moms who have children of the same age to get their children together. Various events that come up are posted. People will share information about a great field trip they’ve been on.”
Sitzwohl, who got involved with online groups well before she began home schooling her children in kindergarten, calls them “very helpful.”
“It was my first means of communication with home-schoolers,” said Sitzwohl, 48, who noted Mary Anne is in second grade and Matthew is in first grade. “It’s a great way to reach people when having questions or doubts. You can send it (a query) out to the group, people will respond to it. It would be more challenging and more difficult and a step back to do without them. It would be like going back to the 20th century.”
For information about additional home schooling groups, such as TORCH – Traditions of Roman Catholic Homes – visit archbalt.org/schools/general-information/traditions.cfm
Also see:
Priests offer five tips for slowing down this Advent
Hunger awareness campaign launches: Baltimore archbishop spends snow Tuesday at Our Daily Bread
PrevNext