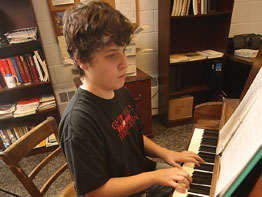 After the contemporary music group at Immaculate Heart of Mary, Baynesville, practices a song, the group’s director asks them to sing the last refrain again.

And again, until they end the song just the right way.

That’s hardly unusual, except that the group’s director happens to be a 14-year-old high school freshman.

Justin Gough, who attends Calvert Hall College High School, Towson, has been the director since November, just after his confirmation; before that, he played piano and sang with the group.

“It was awkward in the beginning to give directions to adults,” Justin said. Now he directs them with a gentle confidence.

As director, he chooses the music for the group, which also boasts a father-and-son guitar team, a flute player and the occasional percussionist.

“I pick all the music for Mass,” Justin said. “You really do want to focus on Scripture.”

He spends about an hour each night picking out and practicing music. But he makes sure to get his homework out of the way first. He also helps set up for the folk Mass, held in the gym on Sunday mornings, and directs the weekly rehearsal.

“He’s very dedicated, and that’s one of the reasons we really wanted to develop talent from within,” said Thomas Bozek, director of music for Immaculate Heart of Mary. “We’ve had people come in who see it as a job. I think Justin sees it as a vocation – serving the parish.”

“We’re very happy to have him; he’s been doing a great job,” said Father Michael W. Carrion, pastor of Immaculate Heart of Mary.

Justin’s mother, Lisa Gough, recalled that when Justin was a toddler, he would visit his grandmother, who had a piano. “He would never pound on it,” Mrs. Gough said. “He would play the keys, and my mother-in-law said, ‘He’s really got something.’”

“I started to play piano as a summer hobby before first grade,” Justin said. “It was something to do in the summer.”

He took weekly lessons, and in sixth grade he attended a pipe organ encounter, a summer camp to expose children to the instrument. He was promptly hooked.

“I’ve always liked the organ,” he said. “I always went to church on Sundays and saw it and I said, ‘Give it a try.’” He now studies the organ with Jonathan Moyer, a teacher at Baltimore School for the Arts, and he’s teaching himself to play the guitar.

“Really, my life is music,” he said with a laugh.

At Calvert Hall, he’s in the jazz band and sings bass with the Hall Men, a choral ensemble. That experience has really helped him handle the responsibility of directing the contemporary group.

“It was a lot of work, but being in the Hall Men really ironed it out,” he said.

When asked what part of his musical life touches him the most, Justin said, “It’s all of it. I can’t pick one I really like the most – it’s that great feeling.”

Justin isn’t quite sure where he’ll go after high school – he’s thought about studying music, of course, and business. He’s also thought about the seminary.

But right now, he’s 14, and he has to prepare the music for a liturgy.