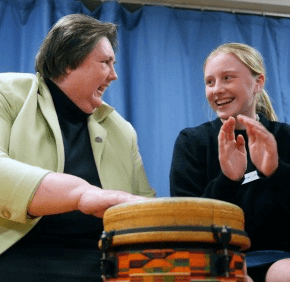 TOWSON – How large is the heart of School Sister of Notre Dame Patricia McCarron?

There is the one at Notre Dame Preparatory School, the grades 6-12 school for girls where she first taught in 1984, and which she has served for the last 10 years as headmistress, nearly tripling its endowment and leading it to National Blue Ribbon status.

There is her religious order, which she joined in 1989, one that furthered her education and identified her considerable leadership skills.

And there is the Rodgers Forge household she was raised, headed by a late father and a still-going-strong mother, where the McCarron children literally crossed the street to study and worship – although home was a good place to do both.

“Connecting the dots” was the tagline on a recent promotional campaign for Notre Dame Prep, an ethos evinced by dozens of students in summer science internships, under the auspices of the school’s Women in Science program.

“Some of the glass ceilings we saw in the 1980s have been shattered,” Sister Patricia said. “We’re all about opening doors; we don’t want any obstacles in place. If you want a summer internship in dentistry, engineering or veterinary science, we have a network of alums and business partners that help make that happen.”

Elizabeth Penn, from the class of 2016, is in Philadelphia for a six-week residency program at Thomas Jefferson University’s Sidney School of Medicine, where she’ll study basic biomedical and molecular biology lab techniques.

Walker’s internship was coordinated by Dr. Gail Cunningham, chief medical officer of U of M St. Joseph, where Sister Patricia has been a fellow board member.

“Sister (Patricia) has been a strong supporter of exposing young women to careers,” Cunningham said, “that will bring them long term success, independence, intellectual growth and support of humanity for the greater good.”

Sister Patricia on broadening the possibilities of her students: “It is a privilege to invite people into the mission. Mothers, business leaders, engineers, scientists; who will be the peacemaker? Are we going to be the school that educates the girl who’s going to bring clear water to everyone in Africa?”

“The girls know the mission. You are your sister’s keeper.”

Her voice and cadence rise when she warms to a topic, which means pretty much everything under the sun, among them a pilgrimage to Bavaria to explore the roots of Blessed Mother Theresa of Jesus Gerhardinger, foundress of the S.S.N.D.s.

Sister Patricia was a 1980 graduate of the Institute of Notre Dame in Baltimore, which was founded in 1847 by the S.S.N.D.s, who opened Notre Dame Prep in 1873, on the campus of what is now Notre Dame of Maryland University (NDMU).

“I was really blessed, because I had opportunities and people who saw potential in me,” she said. “I never felt I there wasn’t an opportunity to do whatever I wanted to do. I see that today with our girls. We believe and know they can do whatever it is they want to do.”

Before she became headmistress of NDP in 2005, Sister Patricia served NDMU as a dean. When Marylou Yam was formally inaugurated as the 14th president of the university April 17, it was Sister Patricia who spoke for the S.S.N.D.s.

“The SSND charism of unity – that all may be one – is exemplified daily by Sister Patty,” said School Sister Kathleen Feeley, president of the college from 1971 to 1992. “She always reaches out to others. She creates what scientists call a ‘unified field’ that binds persons together in the educational mission they share.”

Sister Kathleen described a meeting about a “small” project, which included Sister Patricia and two of her colleagues “who would have key roles.”

“They became the planners, and took full responsibility for the project,” Sister Kathleen said. “She empowers others.”

Sister Patricia holds a master’s degree from Loyola University Maryland, and her doctoral thesis at The Catholic University of America in Washington, D.C., was titled “Catholic School Leadership in Catholic Secondary Schools: Beliefs, Behaviors and the Manifestation of Catholic Identity,” but it is not as if the S.S.N.D.s or Jesuits had to light a fire to learn under her.

“My father was a ferocious reader,” Sister Patricia said. “Mom was the math person.”

Gerard McCarron was one of the first lay teachers at Calvert Hall College High School, where he taught history and coached baseball, the latter as a legacy, as his father, Edward, preceded him into the school’s Hall of Fame.

In 2004, four years before his death, he was awarded the school’s first-ever St. John Baptist de La Salle Award, given to an alum who displays leadership, faith and service.

Her mother, Mary Elizabeth, was educated at IND and NDMU, and was midway through graduate school at Boston College when she returned home to marry Gerard and start a family.

“Patty was 5 when I had the twins,” Sister Patricia’s mother said. “She was almost like a little mother to them.”

Kathleen Landers is a third-grade teacher at the School of the Cathedral of Mary Our Queen in Homeland, and Mary Agnes Sheridan is the STEAM coordinator for NDP’s middle school. Their younger brother, Edward, is a doctor.

Sister Patricia is a member of the athletic Hall of Fame at both IND and NDMU, where she missed the start of the Christmas dance her freshman year because she was coaching the twins’ eighth-grade basketball team.

All walked across Overbrook Road to St. Pius X School, which was staffed by – who else? – S.S.N.Ds. Every Saturday included the sacrament of reconciliation, and the TV was not turned on until everyone’s homework was completed.

“We had one car, and one TV, and you had to learn to share everything,” Sister Patricia’s mother said. “We worked together, we played together. Mainly, we prayed together.”