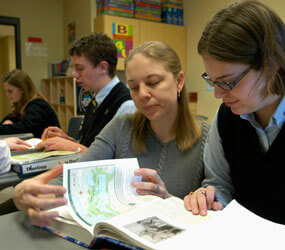 This fall their son will be attending Notre Dame College Prep in Niles, Ill., just outside Chicago. Classes at the all-boys school were to start Aug. 17, and this year the school includes a program for students with special needs that is modeled on the Hand in Hand program at Pope John Paul II High School in Henderson.

Notre Dame is the first Catholic high school in Illinois and one of only a handful across the country to offer a special education program.

“It’s exciting that other schools are taking notice and realize they can serve this population,” said Adrienne Parks, director of the Hand in Hand program. “This population deserves an opportunity to be in a Catholic school.”

All of the Burkes’ five children, except Ryan, have attended Catholic schools.

“We believe the Catholic faith is a crucial part of each kid’s education,” Kevin Burke told the Tennessee Register, Nashville’s diocesan newspaper. “For our family, the only thing holding Ryan back was his disability.”

But when the family started approaching Catholic high schools near their home, schools were not willing to accept their son, fearing they didn’t have the necessary resources.

One school the Burkes approached was Notre Dame, where their former pastor, Father Raymond Klees, was executive vice president. The school principal, Daniel Tully, was initially skeptical that the school could offer anything for special-needs students.

But the Burkes didn’t back down. Instead, they encouraged Tully and Father Klees to visit the Hand in Hand program that they learned about from their daughter, a doctoral student in special education at Vanderbilt University in Nashville.

Tully said that during the plane ride to Tennessee last spring he wasn’t sure what to expect but by the return flight he was convinced his school should offer something similar.

He was particularly impressed with “how much of an impact the program had on the whole school, not just the five students in the program.”

The Notre Dame staff also visited some of the other Catholic schools in the country that offer special education. The Illinois school’s board approved the launch of the program last July.

Like students in the Hand in Hand program, special-needs students at Notre Dame will receive some specialized instruction in a separate classroom, while attending other classes, such as religion, with the rest of the student body. Student volunteers also will serve as mentors and assist the students in navigating the school.

Although Ryan will be the only student in the program at Notre Dame this school year, Tully hopes that number will increase. He also is convinced the program can be a model for local coed and girls Catholic high schools.

Notre Dame received a donation for the program from Chicago Alderman Ed Burke and his wife, Illinois Supreme Court Justice Anne Burke. (The couple is not related to Ryan’s family.) Anne Burke in 1968 founded the Chicago Special Olympics, which was expanded to a national program by the late Eunice Kennedy Shriver.