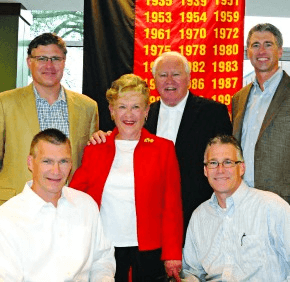 By Paul McMullen
pmcmullen@CatholicReview.org
Twitter@ReviewMcMullen
In 2005, after Mount St. Joseph won its second Maryland Interscholastic Athletic Association A Conference soccer title under coach Mike St. Martin, he got some tongue-in-cheek advice from Bill Karpovich, one of his mentors.
“He told me to get really good players, then get out of their way,” St. Martin said. “That was so far from how he coached, I knew he was kidding.
“He did have some very talented players, but pushed them to go beyond what even they thought they could accomplish. He did not put up with prima donnas. A lot of very good players transferred out of Calvert Hall because they could not buy into his philosophy of extremely hard work, and team-first.”
Karpovich, 75, died at his home in northeast Baltimore May 13.

Bill Karpovich’s soccer coaching career at Calvert Hall stretched from 1967 to 1997. (Courtesy Calvert Hall)
He coached the Cardinals from 1967 to ’97, and retired with 422 victories and 19 championship teams. A taskmaster and motivator, he developed an attacking style and elite players, some of whom became elite coaches.
St. Martin’s Calvert Hall teammates in the mid-1980s included Rich Zinkand, now the coach of the Cardinals.
“While playing for Karp was a great experience, I don’t think I realized at the time how instrumental he would be on my career as a teacher and coach,” Zinkand said.
Zinkand teaches English. A math teacher who had a degree from The Johns Hopkins University, Karpovich chaired that department at Calvert Hall for 20 years.
“Karp was a disciplinarian, both on the field and in the classroom,” Zinkand said. “He taught me how important it is to work hard every day and to maximize the potential of every player and student. As a coach, Karp taught all of us that in order to be successful you must push yourself beyond what you think is possible.”
At Calvert Hall, Karpovich coached many of the men who helped keep Baltimore on the soccer map.
Pete Caringi (now the UMBC coach), Lou Spath and Rich DeSantis helped the University of Baltimore win the NCAA Division II championship in 1975. A year later, what is now Loyola University Maryland took that crown, with Calvert Hall’s John Houska in the goal and a roster stacked with other former Cardinals, such as Steve Craig, Kevin Healey, Tim Linz, John Palmere, Greg Portera and Joe Vitrano.
Loyola reached the NCAA Division I quarterfinals in both 1986 and ’87, with a slew of Calvert Hall grads, such as midfielder Sam Mangione, stopper back Jeff Nattans, defender Jim Moriconi and one of Karpovich’s four sons, John, at the sweeper position.
Not all of Karpovich’s proteges stayed home. Billy, the youngest of his sons, graduated from Calvert Hall in 1987 and went to play for Duke University, which had won the NCAA championship when he was a Cardinal senior.
Similarly, Chris Reif went north, to the University of Connecticut in 1984, when it was a national power. Reif was well-versed in recruiting, as he went to Calvert Hall even though his father, Bernie, had started the program at Archbishop Curley High.
“He (Karpovich) was the first person to recruit me, and challenged me from day one as a freshman,” Reif said. “You were held accountable on the field and in the classroom, and you always knew where you stood with him.”
Karpovich was old-school tactically, as he continued to use three forwards at a time when coaching rivals were using two, or only one, but was an innovator in practice.
“He was ahead of his time for small-side training,” Reif said. “We would play three versus three and four versus four short-sided games instead of full scrimmages.”
Karpovich’s reach spread to indoor soccer. Tim Wittman jumped from the Calvert Hall Class of 1981 directly to the Baltimore Blast. That franchise is still a power, with a president, Kevin Healey, who also played for Karpovich, in the early 1970s.
Karpovich lived in the Mayfield section of Baltimore, where he and his wife, Theo, raised their four sons, in order: Paul, Mark, John and Billy. Their sons gave them seven grandchildren.
Karpovich’s home parish was St. Francis of Assisi, and his sons attended the parish school. In retirement, he lowered his brusque guard and tutored former St. Francis of Assisi School students, helping them improve the math portion of their SAT and thus their college options.
A viewing will be held May 16, 2-5 p.m. and 7-9 p.m., at the Ruck Funeral Home, 5305 Harford Road (at Echodale). A funeral Mass for Karpovich will be held May 17, at 11 a.m., on the campus of Calvert Hall, in the McManus Theater in the Marion Burk Knott Center.
Calvert Hall honored Karpovich last September, at halftime of its home game against Mount St. Joseph, when Zinkand and St. Martin, respectively, coached against each other.
Also see:
Calvert Hall sends Karp off in style
Inside Sports: Reif Cup honors Curley coach, Calvert Hall parent
Deacon John Boscoe, 79, remembered as gentle, committed minister