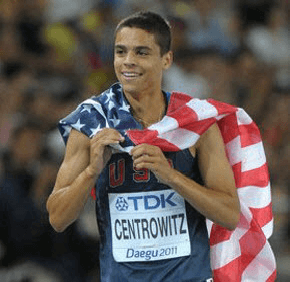 What connection does St. Andrew by the Bay Parish in Annapolis have to the 2012 Summer Olympics?

Matthew Centrowitz will represent the United States in track and field’s 1,500 meters in London, where the Games begin July 27. He’s been based in Eugene, Ore., since 2007, but Centrowitz first gained acclaim while running for Broadneck High outside Annapolis, where he took his first Communion and was confirmed at St. Andrew the Bay.

The parish figures in the religious medal Centrowitz wears during races.

“Three years ago, Matt asked me for a gold cross,” said Beverly Bannister-Centrowitz, his mother. “I bought one and took it to St. Andrew, had a priest there bless it after 11 a.m. Mass one day. I told him it was for my son. I didn’t say anything about him being a runner.”

That cross was most prominent last September in Daegu, South Korea, where Centrowitz won the bronze medal at the 2011 world championships. Only 21 at the time, he became the youngest American ever to medal in the event at the international level.

While hailed as a breakthrough, that performance came as no surprise to those familiar with Centrowitz’s scholastic and collegiate progress – and his bloodlines.

His mother, a licensed social worker, was a field hockey player in her native British Guyana. Her college in New York didn’t offer that sport, but she switched to track and became an accomplished half-miler, with a best of 2 minutes, 8 seconds.

His father, Matt Centrowitz, was a two-time Olympian for the U.S., in 1976 and 1980, and set the American record for the 5,000. He is the veteran cross country and track coach at American University in Washington, D.C.

He was a prep legend at Power Memorial High School in New York, where he credits the friendships he made and time spent with the Christian Brothers as being vital in his life.

“I get more calls from Power Memorial people than anyone else,” he said, of the reaction to his son joining him as an Olympian. “It was already a running power with a great tradition when I got there (in 1970). Brother John Bielen was a great coach, and great influence.”

The elder Centrowitz ran for Manhattan College before transferring to the University of Oregon, where he filled the void left by the 1975 death of Steve Prefontaine, America’s biggest running star of that era.

Matthew Centrowitz moved onto Oregon himself after Broadneck High, where he lowered the meet record in the 1,600 to 4:04.9 at the 2007 Maryland state championships.

In the spring of 2011, he won the NCAA championship in the 1,500, and followed that with a title at the USA Track and Field championships, becoming the first Oregon undergraduate since Prefontaine to win a USA outdoor title. After the world championships, he passed on his remaining collegiate eligibility, signing an endorsement contract with Nike and turning professional.

He qualified for the London Olympics at the U.S. Trials, despite a knee injury that curtailed much of his training throughout the spring.

The first round of the 1,500 will be contested Aug. 3. The semifinals are Aug. 5, and the final is set for Aug. 7. Still just 22 years old, Centrowitz is a long shot in London, where he is attempting to become the first American to medal in the men’s 1,500 since Jim Ryun took the silver in 1968.