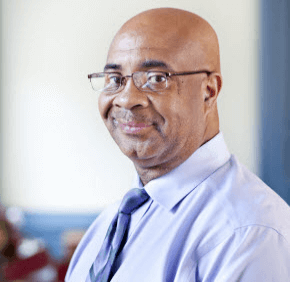 TIMONIUM – As Ray Wright tells it, he expected to be “God’s gift to child care” when he started his job working with children and youths with emotional and behavioral challenges at Catholic Charities of Baltimore’s Villa Maria 30 years ago.

He was 21 and inexperienced, but with tasks such as distributing toothpaste, his position seemed simple – that is, until the kids in his care ran away on his third day.

After a skirmish in the cafeteria, several shot out the door and down a hill on the center’s wooded campus in Timonium. When they came back a half-hour later, they explained they did it to test Wright – to see if he was going to stick around.

“That’s what taught me a lesson,” he said. “Prior to coming here, they’re so used to adults coming in and out of their lives … they are looking for people who are really committed to them, and are going to be here every day, so you can build trust with them and establish a relationship and rapport.”

In the years since, he has been tested daily by the work he does at St. Vincent’s Villa Residential Treatment Center, which Catholic Charities renamed after Villa Maria merged with St. Vincent’s Center two years ago.

Wright, 52, is now the director of residential and clinical services at St. Vincent’s Villa Residential Treatment Center. He was honored by Catholic Charities in April with its distinguished service award.

Despite the difficulty of working with youths who sometimes spit, bite or run away, Wright said he never thought about leaving. Instead, he looks forward to coming to work every day, he said.

“Once you turn things over to God, he helps guide you and helps you to understand what you’re dealing with, and doesn’t put you in situations you can’t handle,” he said.

Wright grew up in Baltimore and lives in Randallstown with his wife, Alison, and their daughter Taylor, 14. He is an active parishioner of New All Saints in Liberty Heights.

He always knew he wanted to work with youths, he said, which he attributes to his dad, who was a role model for him and other children in his neighborhood, he said. Wright’s mother was a social worker who was active in the family’s parishes and schools.

“She was the religious spearhead for me,” he said.

Early on, Wright learned that to do his job well, he had to spend a lot of time with the clients – who range in age from 5 to 14 – to learn what makes each one “tick,” he said. “You can’t treat any person the same” as someone else, he pointed out.

He takes pride in the success stories – former clients, now adults, who call to tell they graduated from high school, have jobs and are productive citizens. There are also those “who go the wrong way,” sometimes dying young.

Wright takes heart in knowing that St. Vincent’s Villa gave them a chance, and may have saved them from even worse fates, he said.

Bev Butler met Wright when her son – then 12 – enrolled in the center’s program. Today her son is 24 and doing well, she said. Her experience compelled her to become a family support specialist at St. Vincent’s Villa.

She said Wright once saw her son walking down the street years after he had left the program. Wright pulled his car over, chatted with him and gave him a ride.

“He would have done that for everybody,” said Butler, who attends St. John in Westminster. “It gives families a lot of confidence that here is this guy at the top who knows everybody.”

“The reason why a lot of people are here is because they want to make a difference in the lives of the kids and the families, and that’s really emotional at times. You need somebody behind you to say, ‘Hey, you’re doing a good job, and it’s going to get better,’ and Ray’s that person.”