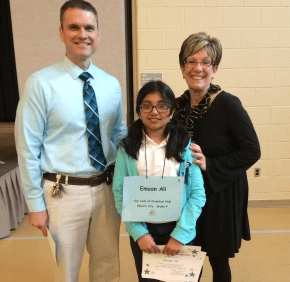 Emaan Ali, right, won the archdiocesan Department of Catholic Schools spelling bee May 4. She is a fourth-grader at Our Lady of Perpetual Help School in Ellicott City, which was host to the competition. Also pictured, from left, are Maggie Narducci-Brown, a representative of Houghton Mifflin Harcourt School Publishers (HMH), a sponsor; third-place finisher Cameron White, a sixth-grader at St. John the Evangelist School in Severna Park; runner-up Nathan Cox, a fourth-grader at Immaculate Conception School in Towson; and Jennifer Decola-Fitzgerald, another representative of HMH. (Courtesy Archdiocese of Baltimore)