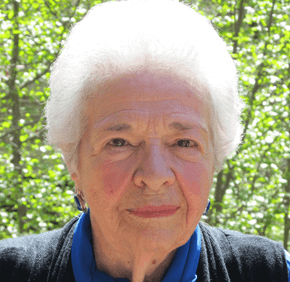 By Matt Palmer
mpalmer@CatholicReview.org
Adventure has a name, but it’s not Indiana Jones.
It’s Barbara Walker, who was a world traveler before she moved into Catonsville’s Charlestown Retirement Living Community with her husband 18 years ago.
Now 93 and widowed, she’s still touring mountains, traveling down ancient rivers and visiting Native American reservations.
She’s showing that anyone of any age, given good health and the necessary resources, can visit locations that they’ve only seen on television or read about in books or newspapers.
“My life has been one happening after another,” she said. “I’m not sure any of it was planned. “
She’s even been on all seven continents and traveled to Antarctica for the first time five years ago.
Naturally curious, Walker moved frequently with her husband, Bill since he a career Army officer.  The couple was married for 61 years and had one daughter.
At Charlestown, Walker shares the joy of traveling with her fellow residents with films broadcast on the community’s in-house station. She also answers questions during presentations in the complex’s auditorium.
“Our world is becoming so small since television has come to the fore, and, particularly now with the computers and all the social media age,” said Walker.
During her travels, Walker takes a Charlestown camera with her and films many locations and people. When she returns, she edits using an Apple computer and its iMovie program.
Despite requests from Charlestown staffers, Walker was hesitant to take video equipment on her personal trips.
“Now I look back on it and think that was really selfish of me to have those kinds of opinions,” Walker said. “A lot of people have been to these places and they love to revisit it.  A lot of people would like to travel and, for a variety of reasons, cannot. They travel vicariously through it. When I found what pleasure it was giving people, I stopped dragging my feet about it.”
Her films, which have featured China and Cambodia among other countries, have become must-see programming for Charlestown residents.
For all her globetrotting, Walker has not taken many photos during her lifetime of traveling. The images now reside in her mind and on a large library of DVDs in the television studio.
Charlestown also has a traveling coordinator, who organizes many regional trips and cruises.  Walker went on one of the trips to Point Lookout in St. Mary’s County.
Walker, though not frequently, has traveled with fellow Charlestown residents to countries such as Israel.
Walker’s energy often means she travels alone as part of a group, but that’s her choice.
“I have really crazy sleeping habits,” she admitted, laughing hard as she talked. “I’m up early in the morning and up late at night. If you’re traveling with somebody who needs eight hours of sleep, I could be a hazard to their health. I’d hate to lose a friend, and I think I might, if I travel with them for any length of time. I seem to be more adventurous than others. If I want to go some place, I’m going.”
Many of the countries she’s visited were ones she saw just after World War II.
“You got outside the United States in those days and it was pretty primitive living,” she said. “People were desperately poor. The United States was not affluent itself at that time.  We’ve certainly come a long way and I wanted to reassure myself that good things were happening elsewhere, too.”
Walker took an early spring trip to a Native American reservation (“I saw my only snow of the winter in Arizona!”) and is ramping up for a June trip to Peru and Bolivia.
She gleefully talks about her “bucket list,” and relishes her opportunities.
“Health is a big issue with people as you get older,” Walker said. “I’ve been blessed with really good health. That’s the primary reason I’m able to do this.”
Despite all the extraordinary things she has seen, the reason she travels is for the people.
“It’s the human connection,” she said, “that makes all the difference,”
PrevNext