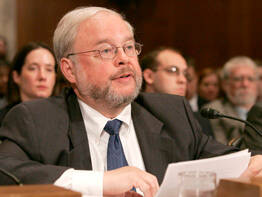 WASHINGTON – The “old-fashioned” virtues of prudence, the pursuit of the common good, and the duty to stand with the poor and vulnerable are needed to address the issue of climate change, U.S. bishops’ official John Carr said in testimony June 7 before the Senate Committee on Environment and Public Works.

Carr, secretary for social development and world peace for the U.S. bishops’ conference, said ingenuity, creativity, entrepreneurship and economic markets can help develop the knowledge, technology and measures to make progress against climate change and limit its damage.

“This is a crucial time to build up the common ground for common action to pursue the common good for all of God’s children and creation,” Carr said.

Carr was one of seven panelists, all of whom represented religious denominations or organizations, testifying at the hearing, which was titled “An Examination of the Views of Religious Organizations Regarding Global Warming.”

“We do not have to know everything about global climate change to know that something significant is occurring,” Carr said. Quoting the U.S. bishops’ 2001 statement “Global Climate change, A Plea for Dialogue, Prudence and the Common Good,” he said, ‘We know that when a problem is serious and worsening, it is better to act now rather than wait until more drastic action is required.”

A “concerted and persistent effort” is required to pursue the common good on climate change with an attitude of “we are all in this together,” Carr added. He said he had been to three statewide gatherings, most recently in Alaska, that brought together leaders in various fields on the issue.
“Such gatherings can create an environment of dialogue and common ground for common action on climate change,” Carr said.

Borrowing from the film documentary by former Vice President Al Gore, Carr said, “the real ‘inconvenient truth’ is that those who contributed least to climate change will be affected the most.” He noted how the presidents of seven Catholic bishops’ conferences sent a letter to Group of Eight leaders before their recent summit in Germany in which they said the costs to prevent and mitigate climate change “should not be placed on the shoulders of the poor.”

Others testifying at the hearing were Bishop Katherine Jefferts Schori, presiding bishop of the U.S. Episcopal Church; the Rev. Jim Ball, president and CEO of the Evangelical Environmental Network; Rabbi David Saperstein, director and counsel for the Religious Action Center for Reform Judaism; Russell More, dean of the theology school at Southern Baptist Theological Seminary; the Rev. Jim Tonkowich, president of the Institute on Religion and Democracy; and author-historian David Barton.

Bishop Schori, who was an oceanographer before she joined the clergy, noted: “The scientific community has made clear that we must reduce carbon emissions globally by 15 to 20 percent by 2020 and 80 percent by 2050 in order to avoid the most catastrophic impacts of climate change.”

She added, “Each of us is … connected with our neighbor in many unexpected ways. The connectedness of creation is part of what (St.) Paul meant when he spoke of Christians being a part of the one body of Christ.”
Rev. Ball, a signatory to the Evangelical Climate Initiative, said the initiative makes four basic claims in its call to action: human-induced climate change is real; the consequences of climate change will be significant, and hit the poor the hardest; Christian moral convictions demand a repose to climate change; and the need for governments, businesses, churches and individuals to “act now is urgent.”

In his testimony, Rabbi Saperstein referred to an initiative in the Jewish community – “How Many Jews Does It Take to Change a Light Bulb?” – in which U.S. synagogues installed more than 50,000 compact fluorescent light bulbs last year at Hanukah.

In making his case to shield the poor from the effects of climate change, Rabbi Saperstein said, “We need only consider the record surface temperatures of the last 20 years or look into the faces of the victims of Hurricanes Katrina and Rita. Those with the fewest resources get left behind and forgotten. Disproportionately, they are the ones forced to fend for themselves.”