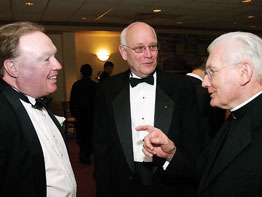 “It is an assurance that the dream continues,” said the retreat house director, “and that more and more young people are given at least a glimpse into the divine, which is so often hard to find in our world.”

When Monsignor O’Dwyer began his dream 45 years ago – a “spiritual powerhouse for youth” – Father Nocchi said he can’t believe the monsignor could have imagined what it was to become. “It is the dream that I try to grow on as director for the past two years.”

The priest often asks for Monsignor O’Dwyer’s intercession because “it is obvious that he is still very much alive in this sacred place, a place where young wounds can begin to heal.”

Mr. Ruck was selected as an honoree for his overall commitment to young people throughout the archdiocese. The 61-year-old is a parishioner of the Basilica of the National Shrine of the Assumption of the Blessed Virgin Mary, Baltimore. His son, Michael Ruck, Jr., is a retreat house board member.

Owner of three funeral homes, the Ruck family has been the largest individual contributor to the Youth Recreational Facility at the retreat house, with “a desire to fulfill the mission of the founder that the ‘kids deserve better,’” said Father Nocchi of Mr. Ruck.

Mr. Golueke, 58, is a former 20-year board member and remembers the retreat house consistently being a part of his life, as early as seventh grade.

“When I was in Boy Scouts, I built a path through the woods for people to meditate,” said the parishioner of Our Lady of Grace, Parkton. He chairs O’Dwyer’s annual golf tournament and is the owner of Cranbrook Liquors in Cockeysville.

Both supporters were presented with the Monsignor Clare J. O’Dwyer Award for their continued loyalty to the facility.

The evening’s more than $50,000 in proceeds culminated from a $150 per plate donation, a live auction, and sponsorships, which will benefit The Founder’s Youth Recreational Facility Capital Campaign at the retreat house. More than $300,000 of the $1-million goal has been raised, said Bernadette A. Moyer, director of development.

Bishop W. Francis Malooly is the honorary event chair for the capital campaign.

The project began with a total renovation of the pool (completed 2007) and now includes a baseball diamond, sand volleyball courts, outside amphitheater, new pavilion and locker rooms, and meditation gardens.

“It will allow the retreat house to take a more holistic approach to the youths that we serve,” said Ms. Moyer, “mind, body and soul.” This year more than 8,000 youths will walk through the retreat house doors.

The dinner and dancing gala, which drew some 200 guests, welcomed Cardinal William H. Keeler as a special guest.

The winner of a pink diamond at the bottom of a champagne glass was Father James P. Kiesel, pastor of St. Dominic, Hamilton.

Father Nocchi celebrated a Mass in the retreat house chapel to end the evening.