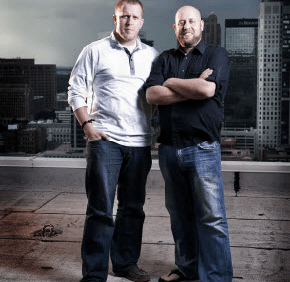 WASHINGTON – Jon and Andrew Erwin couldn’t have picked a less marketable concept for their debut feature film. The brothers, who plied their trade as directors of country music videos, working on Christian-themed movies and on ESPN film crews, decided to tell the tale of a teenage girl who finds out she survived a botched abortion and goes on a road trip to find her mother.

In fact, before the brothers began penning the script for “October Baby,” which debuts March 23 in 372 nationwide theaters, they were inspired by hearing abortion survivor Gianna Jessen speak.

“I honestly didn’t know those two words could fit together,” Jon Erwin, the film’s co-director, co-writer and co-producer, told The Catholic Review. “I began to Google abortion survivor and began to study for myself and the more I did, the more I was mesmerized and horrified. I had no idea this was a reality of our culture. The idea that somebody could survive a procedure like that … I found very intriguing. The question was, ‘How could I bring awareness to it?’ ”

Raised in Alabama in the Baptist church, the Erwin brothers started working on the “October Baby” script two years ago. The film is drawing buzz in the pro-life movement thanks to its tagline, “Every life is beautiful.” Teenager Hannah (played by Rachel Hendrix in her feature film debut) questions why she has so many medical issues. After one incident, a doctor and her father tell her about the abortion and that she was adopted by the people she believed were her birth parents.

Despite the objections of her adoptive father, played by Dukes of Hazzard and Smallville star John Schneider, Hannah travels with her friends in order to examine her past and find the woman who tried to abort her.

Hendrix was wowed by the script.

“I perceived it as a really great story that had the subject matter tapping into something that people don’t like to talk about,” Hendrix said. “I didn’t think it was some sort of political film or controversial. I had a very emotional response to the script. It’s very powerful. I remember reading it and getting through the last part and just blubbering. To know the script had that power over me, I knew that the film would definitely speak louder.”

Jon Erwin said abortion has become so politicized in American conversation that the human element had gone missing. No major film studios would touch the film or the topic of abortion, Jon Erwin said.

“I understand at the end of the day people don’t like to be preached at,” he said. “This is an issue that is part of our society that we don’t want to look at, so why would we want to go to a movie and look at it? A movie is such a phenomenal opportunity to bring a focus and a lens on certain things.”

The Erwins didn’t hide their agenda, either.

As the Erwin brothers were casting the film, they turned to a friend, Shari Rigby, to play the role of the mother who tried to abort Hannah. Rigby read the script and asked the brothers, “How did you know?”

Rigby had an abortion at a younger age and didn’t talk about it much. The film, particularly one scene near the end, proved cathartic.

“It was so surreal,” Rigby said of reading the script. “When you’re reading something … that parallels your life 20 years ago you know at that moment it is for you. It’s divine. The wonderful thing about this character is that I didn’t have to blur it. It was really me. There was something that the Lord was going to walk through with me. It was awesome that I could bring in all my baggage and use it.”

Jon Erwin said Rigby’s role, while brief, is “by far the most important in terms of the message of the movie – forgiveness.” Rigby’s true life story is played over the credits of the movie, giving it further resonance.

Hendrix bares a striking resemblance to Rigby, giving their scenes some extra weight. The constant feelings of rejection Hannah is supposed to feel bled into real life, taking a toll on Hendrix.

“You get to a point where you’re like, ‘I feel rejected right now. I feel like this is happening and I need you to hug me,’” Hendrix said.

Jon Erwin, in promoting the film, frequently speaks of the “sanctity of life.” Erwin does not hide the fact that “October Baby” is a “Christian film,” while promoting it. At the same time, the film’s PG-13 rating, teenage road trip storyline and female protagonist could give the film a broader appeal beyond its base audience. There are occasional moments of teen rebellion and humor that lighten the mood.

“At the end of the day, you have to make a movie for yourself,” Jon Erwin said. “I go to the movies to be entertained. I go to the movies to almost be invaded by the emotions of the movie. I want to feel something. It’s very important for the movie to work on that level first. We always want you to be able to come up for air with ‘October Baby.’”

Hendrix said that people have come up to her after preview screenings to share their life stories with her. It touched her to see the film’s issue has resonated and healed wounds for women who’ve gone through abortions and those who have survived them.

“We had no idea that this was going to be what this has become,” Hendrix said.

Along with “Fireproof” and “Courageous,” Jon Erwin believes there is a Christian film movement.

“I think there’s a huge surge in Christian film,” he said. “I can’t wait to see what the next decade holds for all of us. We have the audience. We are the majority. Why we have sat silent in the arts and in our culture is beyond me. We have everything we need to make this happen. We say we’re in the business of buying our culture back one movie ticket at a time, and I think it’s happening and will continue to happen.”

For more on this film, visit The Welcome Matt.