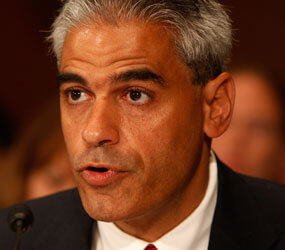 She made the comments July 22 during the Senate Foreign Relations Committee hearings for several of President Barack Obama’s ambassador nominees.

U.S. Sen. Robert Casey, D-Pa., introduced Diaz as well as the president’s nominees to be ambassadors for other countries such as Morocco, Saudi Arabia and the Netherlands.

Casey said the U.S. and the Vatican share many common goals, with peace in the Middle East and the halting of nuclear proliferation being just two examples.
In his remarks, Diaz said he intends to “further the cause of peace by respectfully listening and learning from others.”

Originally from Cuba, he said the experience of living in two cultures will aid him in his efforts to build links between the U.S. and the Vatican.

When they arrived in the States, Diaz’s family could not speak English, but after years of hard work, Diaz went on to receive an education at the University of Notre Dame in Indiana.

Klobuchar, too, said she saw the benefits of Diaz’s Cuban heritage in his work with the Catholic Latino community.

Unlike other ambassadorships, Klobuchar said, the work of the ambassador to the Vatican is based more on ideas than on nuts-and-bolts issues like trade relations, which she said makes it an ideal position for a scholar.

Diaz told committee members and the other nominees of his desire to use his academic work on human identity and cultures to ensure a strong friendship between America and the Vatican. He said he was especially interested in exploring the relationship between religion and human identity, taking into account cultural influences.

He introduced members of his family who were at the hearing: his wife, Marian, and their four children.

The committee gave nominees limited time for statements but entered the full text of each statement into the record.