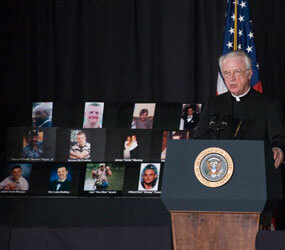 BECKLEY, W.Va. – President Barack Obama, Vice President Joe Biden, Bishop Michael J. Bransfield of Wheeling-Charleston and other dignitaries and religious leaders gathered with thousands from West Virginia April 25 to pay tribute to the 29 miners who lost their lives in the explosion at Upper Big Branch Mine in Montcoal.

“A Memorial Service of Hope and Healing,” held at the Beckley-Raleigh County Convention Center in Beckley, began as West Virginia first lady Gayle Manchin read the names of the 29 miners who lost their lives. The families of the miners processed to the front of the convention center as the names of their loved ones were read and received condolences from Obama and West Virginia Gov. Joe Manchin.

In front of the stage were 29 white crosses, each with a coal miner’s hard hat atop it.

“All the work; all the hardship; all the time spent underground,” Obama said of the miners in his eulogy, “it was for their families. … It was all in the hopes of something better. These miners lived – as they died – in pursuit of the American dream.”

Obama then spoke of the community and its support for the families, its strength in a time of tragedy.

“I’ve seen it myself, the strength of that community,” Obama said. “In the days following the disaster, e-mails and letters poured into the White House. Postmarked from different places, they often begin the same way: ‘I am proud to be from a family of miners,’ ‘I am the son of a coal miner,’ ‘I am proud to be a coal miner’s daughter.’ They ask me to keep our miners in my thoughts. Never forget, they say, miners keep America’s lights on. Then, they make a simple plea: Don’t let this happen again. …

“We cannot bring back the 29 men we lost,” he continued. “They are with the Lord now. Our task, here on earth, is to save lives from being lost in another such tragedy. To do what must be done, individually and collectively, to assure safe conditions underground. To treat our miners the way they treat each other – like family. For we are all family. We are Americans.”

Biden called the miners a “band of 29 roughneck angels” who are now watching over their families and friends. “Collectively, they represent what I believe is the heart and the soul and the spine of this nation … and the nation mourns them,” he said.

In his welcome address, Manchin spoke of the strength and bravery of the men who died in the tragedy and the importance of their work.

“I believe,” he said, “that each of those 29 miners – like every miner working today as well as many of their fathers and grandfathers that worked before them – had not only a strong commitment to provide a good living for their families, but a deep and patriotic pride that the work they did and the energy they produced made America strong and kept her free.

“And my wish is that every American takes the time to say a prayer for every coal miner who is still working today to keep our nation vibrant and safe, and not only to thank them, but honor them for their work and patriotism,” he added.

Manchin also recognized the valiant efforts of the rescue teams, who “stood side by side with all of us throughout this disaster and put their own lives at risk to find their fallen brothers.” The comments prompted a standing ovation by the families of the men who lost their lives, joined by the thousands gathered in the convention center.

Bishop Bransfield was among a number of religious leaders who participated in the service and provided the Gospel reading. In the days after the disaster, the bishop visited Whitesville, where he celebrated Mass for the miners and their families at St. Joseph the Worker Church.

He also celebrated Mass for the miners and their families at the Cathedral of St. Joseph in Wheeling April 11, where he said, “Our country should realize that West Virginia pays too high a price when we turn on our electricity. As one of the greatest suppliers of electricity in our country, we must reflect on what producing this energy truly costs.”

As the memorial service came to a close, the Martin Luther King Jr. Male Chorus began singing “This Little Light of Mine” as the light on each of the miners’ hard hats lining the front of the stage was lit. After the last light was lit, people throughout the crowd joined in singing the song.