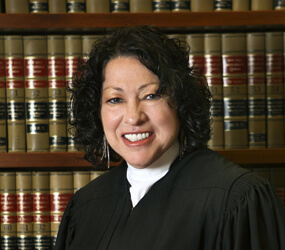 WASHINGTON – President Barack Obama has nominated federal appeals court Judge Sonia Sotomayor to the Supreme Court; if she is confirmed, the New York native of Puerto Rican descent would become the first Hispanic to serve on the high court.

Obama announced his choice of Sotomayor, 54, at a brief event at the White House May 26. If confirmed by the Senate, she would join the court when the next term opens in October, replacing retiring Justice David Souter.

At the White House announcement, Sotomayor described herself as “an ordinary person who has been blessed with extraordinary opportunities and experiences.”

Sotomayor has been a judge on the 2nd U.S. Circuit Court of Appeals since 1998, nominated to that post by President Bill Clinton. Before that she spent six years as a U.S. District Court judge in New York, nominated to that position by President George H.W. Bush in 1991. She also served as an assistant New York County district attorney and worked in private practice.

She was joined at the White House by her mother, Celina Sotomayor; her mother’s husband, Omar Lopez; her brother, Juan Sotomayor, a New York physician, and his wife and children.

In announcing his choice, Obama called Sotomayor “an inspiring woman,” who “has never forgotten where she began,” describing her childhood in a housing project in New York’s South Bronx section, where she was born in 1954. Her parents moved to New York from Puerto Rico during the Second World War.

Obama noted that Sotomayor’s mother had been in the Army during World War II, beginning a family tradition of public service and high aspirations. Sotomayor’s father, a factory worker who had only a third-grade education and spoke little English, died when she was 9.

That left her mother often working two jobs to be able to afford to send her two children to Cardinal Spellman Catholic School, Obama said.

They had “the only set of encyclopedias in the neighborhood,” he said.

Her success in high school led to a scholarship to Princeton University, where she graduated at the top of her class, and Yale Law School, where she was editor of the law journal.

Although some critics of Obama were quick to decry Sotomayor as “a liberal activist,” her judicial record does not reflect that approach on issues including religious liberty and restrictions on federal funds being used for abortion.

For instance, in a 2002 case challenging the Mexico City policy, Sotomayor upheld the government’s right to prohibit the use of U.S. foreign aid funds in overseas family planning programs that provide or refer for abortions.

“The Supreme Court has made clear that the government is free to favor the anti-abortion position over the pro-choice position, and can do so with public funds,” she wrote in a decision on the Center for Reproductive Law and Policy v. Bush. Obama reversed that policy shortly after taking office in January.

In a case in which a rabbi was denied permission to display a menorah in a city park, Sotomayor in 1993 struck down the city regulation barring the display, saying it discriminated against religious free speech.

In other cases she has upheld the rights of a Muslim prisoner to participate in an Islamic religious feast and of followers of Santeria to wear prayer beads under their clothing.

Anthony Picarello, general counsel of the U.S. Conference of Catholic Bishops, said he was still studying Sotomayor’s judicial rulings, but that, “on first blush, her religious freedom decisions are encouraging. But there are other fundamental, court-driven issues – especially abortion and marriage – where we’ll need to take a closer look at the record.”

A notice on the Web site of Cardinal Spellman said she graduated from the New York archdiocesan school in 1972 and had come back as guest speaker for career day two years ago.

Sotomayor married in 1976 while attending Princeton but has been divorced since 1983. She has no children.

She has been described on background by the White House as someone who was “raised as Catholic and attends church for family and other important events.”

Jesuit Father Joseph O’Hare, the retired president of Fordham University who served with Sotomayor on a New York City campaign finance review council, said when he knew her beginning in the late 1980s she was indeed a practicing Catholic. He said he has no reason to think that has changed. They have stayed in touch intermittently, and he said she gave his name as a reference for her FBI background check.

Confirmation hearings will be held in the Senate this summer.