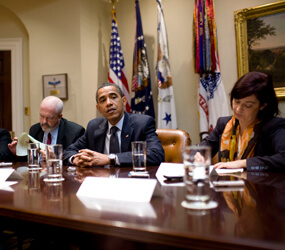 WASHINGTON – President Barack Obama told a round table of religion writers July 2 that he continues to be profoundly influenced by the late Cardinal Joseph Bernardin of Chicago, whom he came to know when he was a community organizer in a project partially funded by the Catholic Campaign for Human Development.

Obama said his encounters with the cardinal continue to influence him, particularly his “seamless garment” approach to a multitude of social justice issues. He also told the group of eight reporters to expect a conscience clause protection for health care workers currently under review by the administration that will be no less protective than what existed previously.

It was held in anticipation of Obama’s audience with Pope Benedict XVI at the Vatican July 10. The 45-minute session touched on his expectations for that meeting as well as aspects of foreign policy, the public criticism directed at him by some Catholic bishops and others in the church, and the Obamas’ own search for a church home in Washington.

The president also clarified that he expects an ongoing review of conscience clause regulations will result in a continuation of protections that have long existed, allowing people who are morally opposed to abortion or contraceptives to decline to provide them in the line of work without repercussions.

Obama said in some ways he sees his first meeting with the pope as the same as any contact with a head of state, “but obviously this is more than just that. The Catholic Church has such a profound influence worldwide and in our country, and the Holy Father is a thought leader and opinion leader on so many wide-ranging issues. His religious influence is one that extends beyond the Catholic Church.”

He said he considers it a great honor to be meeting with the pope and that he hopes the session will lead to further cooperation between the Vatican and the United States in addressing Middle East peace, worldwide poverty, climate change, immigration and a whole host of other issues.

Several of the questions addressed the sometimes contentious relations between the Obama administration and some U.S. bishops, notably surrounding the president’s commencement address at the University of Notre Dame in May. The university’s decision to invite Obama and present him with an honorary degree led to a wave of protests at the university and a flurry of criticism by more than 70 bishops who said his support for legal abortion made him an inappropriate choice by the university.

Statements by the U.S. bishops also have chastised Obama for administrative actions such as the reversal of the Mexico City policy, which had prohibited the use of federal family planning funds by organizations that provide abortions or counsel women to have abortions.

But Obama said he’s not going to be deterred from continuing to work with the U.S. Catholic hierarchy, in part “because I’m president of all Americans, not just Americans who happen to agree with me.”

“The American bishops have profound influence in their communities, in the church and beyond,” Obama said. “What I would say is that although there have been criticisms leveled at me from some of the bishops, there have been a number of bishops who have been extremely generous and supportive even if they don’t agree with me on every issue.”

He said part of why he wants to establish a good working relationship with the bishops is because he has fond memories of working with Cardinal Bernardin when Obama was a community organizer, working with Catholic parishes on the South Side of Chicago.

“And so I know the potential that the bishops have to speak out forcefully on issues of social justice,” Obama said.

The Bush administration change, which took effect two days before Obama was sworn in, hadn’t been “properly reviewed and thought through, he said, adding that there were some concerns about how broad it might be and what its manifestations would be once implemented.”

In general, that change codified longtime federal statutes that prohibit discrimination against health professionals who decline to participate in abortions or other medical procedures because of religious or moral objections.

In his speech at Notre Dame, Obama called for a “sensible conscience clause.”

He told reporters at the White House session that hundreds of thousands of comments for the conscience-clause review had been received.

“We will be coming out with, I think, more specific guidelines,” he said. “But I can assure all of your readers that when this review is complete there will be a robust conscience clause in place. It may not meet the criteria of every possible critic of our approach, but it certainly will not be weaker than what existed before the (Bush administration’s) changes were made.”

Obama said worries that the conscience protections would disappear are an example that “there have been some who keep on anticipating the worst from us, and it’s not based on anything I’ve said or done, but is rather just a perception somehow that we have some hard-line agenda that we’re seeking to push.”