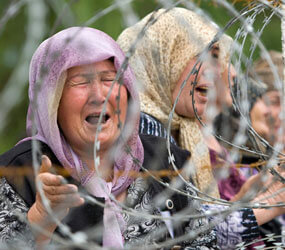 VATICAN CITY – The Vatican ambassador to Kyrgyzstan described the situation in the country as chaotic as ethnic violence increased the number of refugees and displaced people.

“In Osh, there is a situation of absolute humanitarian catastrophe: There are no lights, no gas, no water and no food in the markets,” Archbishop Miguel Maury Buendia, Vatican nuncio to Kyrgyzstan and Kazakhstan, told Vatican Radio June 15.

He said it was impossible to accurately count the injured because the Uzbeks are afraid to go the hospital. He reported dozens of deaths in Osh and said that as of June 13, 47 were dead in the border city of Jalal-Abad. Two Jesuits are responsible for the church in both cities.

Government officials put the death toll at more than 175 June 15, but local officials said it probably was higher, since Muslims traditionally bury their dead the day they die. Some media reports spoke of mass graves in Osh and Jalal-Abad.

The U.N. High Commissioner for Refugees said it would begin an airlift to Uzbekistan June 16 to help take relief to tens of thousands of Uzbek refugees who had crossed the border from Kyrgyzstan.

The Russians arrived with humanitarian aid for the people June 14, but many are afraid to go into the streets because they are afraid of being attacked by groups of bandits, Archbishop Maury told Vatican Radio.

He said old ethnic rivalries between the Uzbeks and Kyrgyzs are the root of the conflict. He said all the people in the region “live in a situation of poverty, but within that poverty the Uzbeks, who work more, are perhaps a little better off, and this generates the envy of others.”

Archbishop Maury said Kyrgyzstan’s “government does not seem able to maintain calm, and some of those who are supposed to be maintaining the calm, it appears, have even been shooting Uzbeks.”

The interim government, led by Roza Otunbayeva, accuses Maxim Bakiyev, son of ousted Kyrgyz President Kurmanbek Bakiyev, of spending millions of dollars to finance the riots. The government asked Great Britain, which is reportedly holding Maxim Bakiyev, to extradite him.

The Uzbek government recently closed its border because of the tens of thousands of refugees trying to cross.