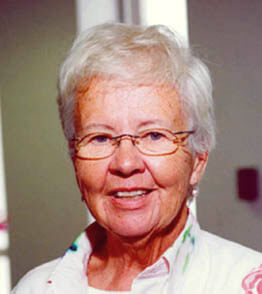 VILLA MARIA, Pa. – Serving a prison sentence in a federal penitentiary is something that Sister Sheila Salmon will never forget. But she learned some life lessons there that she will carry with her wherever she goes.
Among them: that federal prisoners are treated as things, not as people; that many people in prisons should not be there; and that “being imprisoned was a special gift from God.”
Sister Sheila, a Sister of the Humility of Mary, was back at her motherhouse in western Pennsylvania recently and was interviewed by the Catholic Exponent concerning her misdemeanor sentence in Florida for protesting at the Western Hemisphere Institute for Security Cooperation, formerly known as the U.S. Army School of the Americas, in Fort Benning, Ga.
Her motherhouse is in Villa Maria, which is in the Pittsburgh Diocese. The Exponent is the newspaper of the neighboring Diocese of Youngstown, Ohio.
The nun, who lives in Sebastian, Fla., and does outreach work with Mexican migrants at Our Lady of Guadalupe there, served a 100-day sentence in early 2007 for her participation in the annual peaceful protest last November against the school, which trains Latin America security personnel in combat and counterinsurgency.
Background information on the Western Hemisphere Institute Web site says the goals of the institute “explicitly include strengthening democracy, instilling a respect for the rule of law and honoring human rights.”
This time, as in 1999, Sister Sheila crossed the line and trespassed on federal property with 15 others, ranging in age from 17 to 70. Sister Sheila was 70 at the time of her arrest.
She described the protests as “a peaceful funeral procession,” and added that “the protests started in 1984 with nine persons present; last year there were 22,000.”
Critics of the school have tied it to Latin American military personnel involved in murders and human rights violations, but school officials call such accusations ludicrous and emphasize that the institute is open to outside scrutiny at any time. For the last several years during the annual protest the school invites the demonstrators to an open house.
The Humility of Mary community in Villa Maria has been participating for nine years. Sister Sheila said that, in the last year or so, she felt she “had to take a stronger stand and go through the fence” to trespass.
“Part of our charism as a community is nonviolent resistance to unjust things,” she said.
Once she was assigned to federal prison in Tallahassee, Fla., where she was the only person serving a misdemeanor sentence among the 1,100 women there, Sister Sheila settled into her days and nights living in what she described as a cube measuring 6 feet by 8 feet.
“The inmates were wonderful to me,” she said. “They could not have been any nicer. There is a whole rumor mill that exists in a prison; they know who is coming in, what they have done.
“They would come up and say, ‘Are you really a nun?’ When I told them I was really a nun and was in for 100 days for stepping on the grass (federal property), they said, ‘That’s stupid. You shouldn’t be here.’ They said they would watch out for me,” she said.
Although she was “treated well” there, Sister Sheila admitted, “I was not used to the constant noise and the total lack of privacy. I wasn’t used to guards screaming at you all the time, which they did.
“The hardest adjustment for me was to come to the realization that I was being treated as a thing, not a person,” she continued. “I was not a person while I was in prison, except to the inmates. I don’t think anyone could ever get used to that. There is something about people hollering at you all the time for the sake of hollering that is unsettling.”
The experience taught her about the way in which prisoners “live in a state of uncertainty,” she added. “There is tremendous uncertainty in every move. What is going to happen next?”
Prison authorities “keep changing things but will not tell you why,” she said. “But I found that the fact that we were all living in a state of uncertainty … created a bond of compassion. We were all uncertain together.”
She also discovered that prisoners there – who came from all levels of education and none at all – shared a loss of control over their own lives.
“When you have lost all control over everything that makes you you,” she observed, “everything that separates you from others is gone as well. So in a way, I considered being there a special gift from God, because I don’t think I ever noticed these things before.”