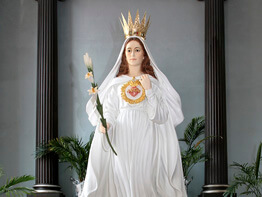 ST. LOUIS – As the last surviving member of the Contemplative Sisters of the Indwelling Trinity, Sister Mary Joseph Therese Fuller said she is happy to see that the devotion to Our Lady of America is gaining momentum.
Today, Sister Mary Joseph Therese serves as director of the Our Lady of America Center in Fostoria, Ohio, which promotes the devotion.
A new official image of Our Lady of America is on display at the Basilica of St. Louis, King of France (Old Cathedral) through Sept. 8. The statue is then expected to visit other U.S. cities through the rest of the year.
Sister Mary Joseph Therese had known Sister Mary Ephrem (Mildred) Neuzil, to whom Mary revealed herself as Our Lady of America. The two nuns met in 1964 and lived side by side for about a quarter-century until Sister Mary Ephrem’s death in 2000.
Sister Mary Ephrem had been in the contemplative order’s cloister for about a week when the foundress of the order showed Sister Mary Joseph Therese the black book that contained the messages from Mary to Sister Mary Ephrem.
“She let me read that, so I knew right from the beginning about Sister,” she told the St. Louis Review, newspaper of the St. Louis Archdiocese. At the time, “I knew nothing about her, but I can still see her standing there with the other sisters that were behind the grille. There was just something about her eyes that stood out – it was very exceptional.”
Sister Mary Joseph Therese said that Sister Mary Ephrem also “was very humble. She was a very happy, peaceful person. She had a real good sense of humor.”
For years before she entered the cloister, Sister Mary Ephrem had worked as a kindergarten teacher and as a domestic for several prelates, the woman religious recalled.
“She was used to being with the bishops,” Sister Mary Joseph Therese said.
“Every time we would have a profession or a new postulant, Sister would always put her at the table with the archbishop and the bishops,” she said.
“Everyone always felt at home with Millie – we always called her Millie,” she said. “Whenever you were around her, you always felt such a peace. She was a very happy person. No matter what would happen … she’d say the Blessed Mother will take care of it.”
Sister Mary Joseph Therese said she, too, is happy that the statue of Our Lady of America was brought to St. Louis and hopes it will increase an awareness of the devotion.
The 9-foot statue of Our Lady of America, which includes its base, was first publicly displayed last November at the U.S. bishops’ meeting in Baltimore, where St. Louis Archbishop Raymond L. Burke blessed it.
“I am so grateful that the new statue of Our Lady of America can be seen in St. Louis,” the nun said. “We are so grateful for the interest shown in the devotion to Our Lady of America by Archbishop Burke, a truly great American Catholic churchman.”
In 2006, a smaller pilgrim statue of Our Lady of America was carried by a delegation of American youths to World Youth Day in Germany and also was taken to the Diocese of Cheyenne, Wyo., and the Diocese of Sacramento, Calif. The statue also was part of the celebrations of a number of Marian feast days around the country, including those at the home convent of Mother Angelica, a Poor Clare of Perpetual Adoration and founder of the Eternal Word Television Network in Alabama.
In his diocese, Catholics’ reception of the statue “was very good,” Cheyenne Bishop David L. Ricken told Catholic News Service in a phone interview last year.
Our Lady of America’s message about purity, chastity and growing in one’s faith through devotion to Mary and the body and blood of Christ especially resonated with young people, he added.
“Our Lady of Guadalupe is important for all the Americas but to have Our Lady of America and the Immaculate Conception as a special patroness for our nation will bring about the peace we so yearn for (and) a resolution to many social issues,” including euthanasia and abortion, California Bishop Richard J. Garcia told CNS.
In 1847, Pope Pius IX approved a request by the U.S. bishops that Mary as the Immaculate Conception be named patroness of the United States.
Bishop Garcia was an auxiliary in Sacramento when the pilgrim statue of Our Lady of America was brought to the diocese. Last January he was installed as head of the Monterey Diocese.
“The Blessed Mother is so important to all of us Roman Catholics, and Christian people in particular, and, specifically for our country, for peace within our land; and the intercession of our Blessed Mother is so important on many issues that affect us morally and socially,” Bishop Garcia said.
Marian devotions, including those to Our Lady of America, also can lead the faithful to really listen to Christ’s message that all must be “bearers of the Gospel and bring about Christ’s love,” he said.
– – –
Contributing to this story was Julie Asher in Washington.