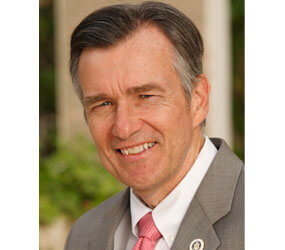 CALABASAS, Calif. – A Sister of St. Louis was killed and the retired pastor of a Malibu parish was severely injured when a car driven by Douglas Kmiec, U.S. ambassador to Malta, crashed into a drainage ditch in Southern California Aug. 25.

Sister Mary Campbell, 74, who was well known at Our Lady of Malibu Parish and taught at the parish school, was dead at the scene, a spokesman for the California Highway Patrol said.

Monsignor John Sheridan, 94, pastor emeritus of the parish, underwent emergency surgery at Ronald Reagan UCLA Medical Center in Los Angeles soon after the accident. He was in critical but stable condition Aug. 27.

Kmiec, 58, on leave as a law professor at Pepperdine University, remained hospitalized, but information about his condition was not available.

The highway patrol said the vehicle was westbound on Mulholland Highway at about 1:30 p.m. when it drifted onto a dirt shoulder and then hit a drainage ditch.

Both Kmiec and Monsignor Sheridan, who was seated in the front of the 2009 Hyundai Accent, were wearing seatbelts, but Sister Mary in the back seat was not, the highway patrol said.

Sister Brid Long of the order’s regional house in Woodland Hills, Calif., told Catholic News Service the three had attended a Mass and luncheon celebrating the 60th anniversary of the congregation’s arrival in the United States and were returning to the parish when the accident occurred.

A statement from Pepperdine University President Andrew K. Benton indicated prayers were being offered for Sister Mary’s family, students at Our Lady of Malibu School and the parish community.

“Sister Mary taught many sons and daughters of Pepperdine staff and faculty over the years and was much loved,” he said. “Her devotion to her students, her strong faith and compassion will long be remembered.”

Benton also said prayers will continue for Monsignor Sheridan and the ambassador.

The parish scheduled a memorial service for Sister Mary at 11 a.m., Sept. 1.