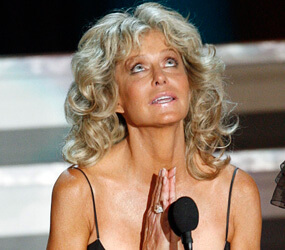 Fawcett, who first rose to fame starring on “Charlie’s Angels,” died in Los Angeles June 25 at age 62 after a three-year battle with cancer. A private funeral Mass was to be celebrated for her at Our Lady of the Angels Cathedral in Los Angeles June 30.

A longtime educator, Sister Patrice, a Sister of the Incarnate Word and Blessed Sacrament, is a former principal of several Catholic schools in the Diocese of Corpus Christi. She said the Fawcett family lived across the street from Christ the King.

Born Mary Farrah Leni Fawcett on Feb. 2, 1947, in Corpus Christi, Fawcett was attending the University of Texas in Austin when a movie publicist saw photos of her after she was named one of the 10 most beautiful people on campus, according to an AP story. The publicist suggested she consider a career in Hollywood and she took him up on it.

After small parts in a couple of TV shows, she was cast on “Charlie’s Angels.” She remained with the show for just one year, but she became a pop icon in the 1970s.

After leaving the show she starred in a few films that were panned by critics, but her starring role in the 1984 TV movie “The Burning Bed” as a wife who is a victim of domestic abuse earned her an Emmy nomination.

About the same time she starred in a well-received off-Broadway play, “Extremities,” about a woman sexually assaulted in her own home. She played the same part in a 1986 film version.

Fawcett also posed partly nude for Playboy magazine and in a Playboy video, “All of Me.”

In 1973 she married actor Lee Majors, but they divorced nine years later. Since the 1980s she lived off and on with actor Ryan O’Neal, with whom she had one son, Redmond. The couple never married. The son is in jail on drug charges.

Though she was raised a Catholic, her faith never seemed to be a topic of her interviews but as she battled cancer she spoke about praying to God and hoping for a miracle.

In a documentary about her struggle that she produced and which aired on network television in May, she was often shown holding a rosary during her treatments. Before her death, news reports said a priest came to her hospital room and administered the church’s last rites.

Sister Patrice recalled her own school days in the early 1950s when she was a seventh-grader at Christ the King School and Diane Fawcett was in the eighth. The two grades were combined and the girls became friends.

Sister Patrice said that when Farrah Fawcett and Majors were in town, they often came by the Incarnate Word and Blessed Sacrament Convent to see two of the older sisters who taught Farrah in school. Both nuns have since died.

The visits were always in the evening and Fawcett wore a disguise, Sister Patrice said. “The press would go wild when she was in town.”

Many of the sisters knew the star, the nun said. Sister Collette Brehony, a Sister of the Incarnate Word and Blessed Sacrament who is now director of religious education at St. Gertrude Parish in Kingsville, had been her teacher at St. Patrick School, according to Sister Patrice.

“She was shocked the first time she saw her on TV,” the nun told the South Texas Catholic, newspaper of the Corpus Christi Diocese.