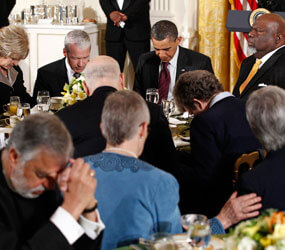 WASHINGTON – At busy times and amid critical national debates, “nothing beats Scripture and the reminder of the eternal” for keeping things in perspective, President Barack Obama said April 19 at his second Easter Prayer Breakfast at the White House.

In brief remarks to a crowd of about 130 guests from various Christian churches in the East Room, Obama said he wanted to have such an event “because as busy as we are, as many tasks as pile up, during this season we are reminded that there’s something about the Resurrection – something about the resurrection of our savior, Jesus Christ, that puts everything else in perspective.”

“Everybody in this room has weighty responsibilities, from leading churches and denominations, to helping to administer important government programs, to shaping our culture in various ways,” he said, adding, with a touch of irony to his voice, “my plate has been full as well. The inbox keeps on accumulating.”

“But then comes Holy Week,” he continued. “The triumph of Palm Sunday. The humility of Jesus washing the disciples’ feet. His slow march up that hill, and the pain and the scorn and the shame of the cross. And we’re reminded that in that moment, he took on the sins of the world – past, present and future – and he extended to us that unfathomable gift of grace and salvation through his death and resurrection.”

The guests were bishops, priests, ministers, women religious and other denominational leaders.

Among the priests in attendance were Father Theodore Parker, pastor of St. Cecilia and St. Leo parishes in Detroit; Father Larry Snyder, president of Catholic Charities USA; Jesuit Father Charles Currie, president of the Association of Jesuit Colleges and Universities; and Oblate Father Andrew Small, outgoing director of the U.S. bishops’ Office for the Church in Latin America and newly named national director for the Pontifical Mission Societies in the United States.

Women religious who participated included Sister Kateri Mitchell, a Sister of St. Anne who heads the Tekakwitha Conference; Sister Carol Keehan, a Daughter of Charity, who is president and CEO of the Catholic Health Association; and Sister Roberta Fulton, a Sister of St. Mary of Namur and president of the National Black Sisters Conference.

Lay Catholics at the event included Arturo Chavez, president of the Mexican-American Catholic College in San Antonio; Supreme Knight DeKarlos Blackmon of the Knights of Peter Claver; Ken Hackett, president of Catholic Relief Services; and Stephen Schneck, chairman of the politics department at The Catholic University of America and director of the university’s Institute for Policy Research & Catholic Studies.

Sister Kateri read a passage from the Book Isaiah – Chapter 25, Verses 6-8 – which talks about God preparing a lavish banquet for all, wiping tears from all faces, removing reproach from all the earth and swallowing up death for all time.

Among the other guests were: the Rev. Leith Anderson, president of the National Association of Evangelicals; Archbishop Demetrios, Greek Orthodox Archdiocese of America; the Rev. Joel Hunter of the Northland Church, a megachurch in Longwood, Fla.; Bishop Mark Hanson, presiding bishop of the Evangelical Lutheran Church in America; Bishop T.D. Jakes, best-selling author and senior pastor of another megachurch, the Dallas-based Potter’s House; the Rev. Sharon Watkins, general minister and president of the Christian Church (Disciples of Christ); and the Rev. Al Sharpton, the New York-based civil rights activist and radio talk show host.

Concluding his remarks, Obama quoted another passage from Isaiah, “But he was wounded for our transgressions, he was bruised for our iniquities: The chastisement of our peace was upon him; and with his stripes we are healed.”

Before the small group of reporters and photographers was escorted out for the balance of the event, Bishop Vashti McKenzie of the African Methodist Episcopal Church, led an opening prayer, which she read from an electronic tablet, in which she thanked God for Easter as the “reversal of Good Friday.”