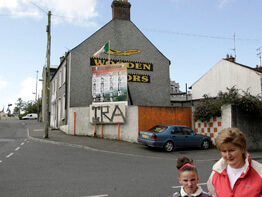 BELFAST, Northern Ireland – A Belfast-based Passionist priest said Northern Irish Catholics feel “joy and relief” that British military operations in the region have come to an end.
Father Aidan Troy, known for his mediation role in the 2001 Holy Cross Girls’ Primary School dispute when Protestant protesters blocked access to the school, told Catholic News Service he hopes that “children in the North will never again have to witness the spectacle of armed troops patrolling the streets.”
In the Catholic community, “there (have been) obviously mixed feelings. But we’re overwhelmingly relieved that operations have come to an end,” said the priest at Holy Cross Parish in the working-class Ardoyne suburb of Belfast.
Father Troy said he hoped that the end of Operation Banner would mark the end of “a very sad chapter in the history of Ireland.”
“If there’s a positive note to this whole affair, it’s that the troops are saying goodbye to a much better Ireland than the one they came to 38 years ago,” he said.
Father Troy said that the end of the operation also “marked another milestone in the road to normalization.”
“In my heart, I am so happy and joyful; it’s not a feeling of good riddance, it’s the closing of a chapter that has been so painful from a human, moral and religious point of view,” he said.
“Now, this is a sign that we’re on the way to a better Ireland – please God,” added Father Troy.
Operation Banner, the longest military campaign in British history, came to an end officially July 31. Security in Northern Ireland is now the sole responsibility of the Police Service of Northern Ireland.
British troops were first deployed in Northern Ireland in 1969 after the local authorities were unable to stop gangs of Protestants attacking Catholic civil rights demonstrators and the burning of Catholic property.
At the time, the British government believed that the deployment would last for approximately six months.
Father Troy said, “We all remember the scenes of joy in Catholic areas when the troops first arrived; they were deployed to stop Catholics being burnt out of their homes and attacked at a time when” the Royal Ulster Constabulary, Northern Ireland’s former police force, was “either unwilling or unable to protect Catholics.”
However, Father Troy added, “the British military presence in the North is undoubtedly blighted by the instances of collusion. This was made worse by the fact that we had a regiment … made up almost entirely of the Protestant unionist community who had access to intelligence on their Catholic neighbors and unrestricted access to weapons, both of which were passed on to loyalist paramilitaries.”
The Stevens Report, published by the British government in 2003, found that there had been widespread collusion in the murder of Catholics between members of the British army and members of loyalist paramilitaries.
More than 3,500 people have been killed during more than 30 years of civil conflict in Northern Ireland between Irish nationalists, who wanted the region to split from Great Britain and join with the Irish Republic to form a united Ireland, and British unionists, who wanted Northern Ireland to remain part of Great Britain.
In May, Catholic-Protestant leaders formed a new power-sharing government. Under the new government, Northern Ireland’s Cabinet-level ministers take over direct responsibility from officials in Great Britain. All decisions are made on a cross-community basis, with a majority of both Catholic and Protestant officials required to make a decision binding.