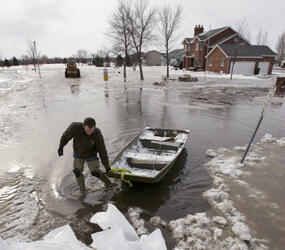 WASHINGTON – Monsignor Gregory Schlesselmann, rector of Cardinal Muench Seminary in Fargo, N.D., was doing all he could during a heavy snowstorm March 26 to prepare for the expected rise in two days of floodwaters of the adjacent Red River.

An existing, half-mile-long clay dike, about 45 feet high in his estimation, was expanded in an effort to keep an expected 41-foot crest of water not only from the seminary property but also from the north side of Fargo.

He told Catholic News Service in a telephone interview March 26 that he couldn’t see the river, because the dike, significantly raised the previous day by the Army Corps of Engineers, blocked the view.

Several days of unrelenting rain had caused the waters of the Red River to rise as much as 5 feet in one day, according to news reports. The city had closed a number of bridges over the river. A heavy blizzard March 25 knocked out power and dumped wet snow and freezing rain on the already rain-soaked region.

President Barack Obama issued a federal disaster declaration March 24 for much of the state.

Monsignor Schlesselmann spent a good part of the morning of March 26 making sure the dike-building crew, who had worked through the night, was well-fed. He was also arranging for a partial evacuation of the junior seminary.

The seminary’s maintenance worker, some resident priests and any seminarians who were particularly handy with water pumps were staying on the property. As of March 26 there had not been a mandatory evacuation.

The rector said he would be “the last man out.”

Some seminarians were planning to stay at the residence of Fargo Bishop Samuel J. Aquila while others were staying at nearby parishes.

Bishop Aquila, who was getting ready to take in seven seminarians March 26, told CNS he was glad to help.

Days before the Army Corps arrived to raise the dike next to the seminary, Monsignor Schlesselmann was coordinating volunteers to pile sandbags on it. The dike was built 12 years ago in anticipation of floodwaters that rose more than 39 feet.

In the days prior to the river cresting in the current storm, the priest was making sure there would be volunteers to patrol the dike at all hours.

Monsignor Schlesselmann, who is not a North Dakota native, said he has lived through two floods in the state in 1997 and 2006.

He said the current reaction of Fargo residents, who were in a “wait and see mode,” has been primarily positive.

“Neighbors are helping each other and there is a great spirit of cooperation,” he said.

With the immediate work behind him, the priest said his main focus was urging people to pray for protection through the “intercession of St. Joseph, who kept the Holy Family safe.”