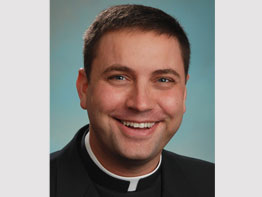 WASHINGTON – A 33-year-old North Dakota priest has been tapped to assume the presidency of the University of Mary in Bismarck, and when he officially starts his new job July 1, 2009, it’s believed he will become the youngest U.S. college president.

University officials made the formal announcement Dec. 5 that they had named Father James Patrick Shea to succeed Benedictine Sister Thomas Welder, who has been president of North Dakota’s only Catholic university for 30 years, since the young priest was a toddler.

The current pastor of two parishes and a chaplain/instructor at a Catholic high school will be 34 on his official first day as the university’s president, and according to a 2006 survey of U.S. college presidents, he will be the youngest in the nation.

“That same report also shows only 10 U.S. college presidents to be under the age of 40 at that time,” Bryan Cook, associate director of the Center for Policy Analysis for the American Council on Education, told Catholic News Service Dec. 8. “Remember, that was in 2006.”

Father Shea told CNS Dec. 8 his new position is a huge task, but he is confident that with the assistance of the superior support staff at the university he will be able to help provide a diverse and quality education with a strong Catholic identity for the 3,000-plus students enrolled at the school.

“I love education, but I never imagined I would become a university president,” he said. “I am young and I have a long time to learn. I can grow into that role. The staff is great and they will help me along the way.”

Father Shea grew up on a farm near Hazelton, N.D., graduated from Hazelton-Moffit-Braddock High School in 1993, and studied for two years at nearby Jamestown College.

In 1995 he entered the seminary at The Catholic University of America in Washington for the Diocese of Bismarck. At the university, as the winner of the prestigious Basselin Scholarship, he earned a bachelor’s degree in philosophy in 1997 and his master’s degree and licentiate in philosophy the following year.

While in Washington, he taught religion in two inner-city elementary schools and worked with Blessed Mother Teresa’s Missionaries of Charity at the Gift of Peace AIDS Hospice.

Father Shea continued his education in 1998 in Rome, where he studied theology under the Jesuits at the Pontifical Gregorian University, and was ordained a priest in 2002 by Bishop Paul A. Zipfel of Bismarck at the Cathedral of the Holy Spirit in Bismarck.

He currently serves as pastor of St. Joseph Church in Killdeer and St. Paul Church in Halliday. He also is a religion teacher and chaplain at Trinity High School in Dickinson, as well as the current chairman of internal affairs for the National Advisory Council for the U.S. Conference of Catholic Bishops.

When Vincentian Father David M. O’Connell, the president of Catholic University, found out about Father Shea’s appointment, he congratulated his former student with a quick e-mail and then told CNS Dec. 9 he was honored to have advised him in the months leading up to his selection.

“His young age and passion for Catholic education are wonderful indicators that we can expect high energy and another clear voice of renewed commitment to all that a truly Catholic higher education offers,” Father O’Connell said. “I look forward to working with him in the future.”

Though the Diocese of Bismarck has only about 60,000 Catholics and about 100 parishes with a limited number of priests, Bishop Zipfel encouraged the young priest to accept the presidency of the nearly 50-year-old university, Father Shea said.

“I have dedicated all of my priesthood to the promotion of Catholic education, because I believe that the Catholic intellectual tradition is uniquely suited to a beautiful and comprehensive vision of total learning,” he said. “Catholic identity in education is the motivating passion of my life. I am committed to the deepening and the invigoration of the Catholic identity of the University of Mary.”