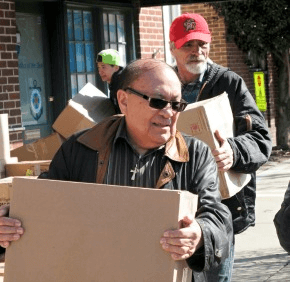 By Paul McMullen
pmcmullen@CatholicReview.org
DUNDALK – If it’s the first Saturday in April, Dr. Carlos N. Patalinhug Sr. and family are at the Apostleship of the Sea, collecting 100 boxes of clothing that will be shipped to the Philippines.
If it’s Holy Week, then he and his wife, Fe, are in Masbate, her hometown in their native country, where they were promoting physical and spiritual wellbeing long before last November, when Typhoon Haiyan damaged or destroyed 600,000 homes and affected nearly 12 million people.
Patalinghug, a parishioner of St. Rose of Lima in Brooklyn since 1971, the year he moved to the U.S., is the president of the Association of Philippine Physicians of America.
He and his wife left Baltimore April 14 for a fact-finding trip to Masbate, where they are laying the groundwork for a January 2015 mission in which he anticipates leading a team of approximately 30 doctors to address the aftermath of what in the Philippines was known as Typhoon Yolanda.
“The winds were stronger than (hurricane) Sandy,” said Patalinghug, referencing the October 2012 storm that devastated large swaths of the East Coast. “It landed in Samar, Tacloban and Cebu, where I was born. There were few deaths in Masbate, which is between Tacloban and Cebu, but the damage there was tremendous.
“There was so much damage to medical centers and hospitals. My group will evaluate what kind of medical team to bring (next January). We will recruit surgeons, dentists for that mission.”
It will be led by a 77-year-old force of nature who came to the U.S. more than four decades ago, got certified to practice internal medicine, opened a practice in Brooklyn and continues to make the rounds at MedStar Harbor Hospital.
He is the patriarch of a vibrant family that includes Father Leo Patalinghug, Culinary Confessions columnist for the Catholic Review, who says that his “Grace Before Meals” apostolate was inspired in part by his parents.
“My parents have always shown a generous heart to family, friends and even strangers,” Father Patalinghug wrote in an email. “Dad’s medical missions and mom’s charity work with feeding centers in the Philippines are the natural fruits from a life of prayer and sincere faith.”
Another son, Carlos Jr., made this trip to the Philippines. He and wife, Alicia, are the parents of six. The first letter of their first names and nicknames spell “Jagmac,” their musical group, which held a fundraising concert for typhoon relief in January.
Carlos Jantzen “CJ” Patalinghug and his five siblings then helped their parents and grandparents April 5, when they brought a series of vans and trucks to the offices of the Apostleship of the Sea, the international Catholic ministry to seafarers, to collect those boxes of clothing.
“After the typhoon, we put out a call for donations in our monthly mailing and parish bulletins,” said Monsignor John L. FitzGerald, executive director and chaplain of the Apostleship of the Sea. “The Knights of Columbus, the Catholic Daughters stepped up. Youth groups sorted, cleaned and folded, and packed and labeled the boxes.”
Those boxes will eventually make their way to the Philippines, via Patalinghug, whose association also receives grants from the Brother’s Brother Foundation.
On his current trip, he found time to distribute 15 boxes of clothing and medicine that were shipped from Baltimore to the Philippines in February, and provide outpatient care along with several other Filipino-American physicians who accompanied him.
“We do a free medical mission to the Philippines every year,” Dr. Patalinghug said. “It’s part of our bylaws. We go to help people who live along the coastal shores. Their livelihoods have been destroyed.”
Patalinghug buttresses an effort that collected $24.5 million in 148 dioceses in the U.S. in a special collection for the victims of Typhoon Haiyan.
The U.S. Conference of Catholic Bishops recently announced that $6.4 million went directly to humanitarian relief, through Baltimore-based Catholic Relief Services. The remaining $18.1 million will be split between humanitarian relief and “long-term church reconstruction and program needs.”
Also see:
Holy Rosary celebrates canonization of two saints at Divine Mercy Sunday Mass
St. John Paul II, patron of sweet tooths? Holy Rosary makes saint’s favorite dessert
PrevNext