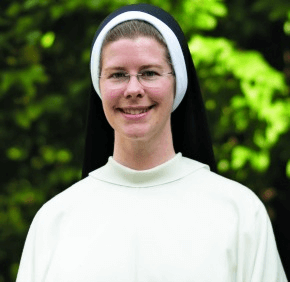 Dominican Sister Mara Rose McDonnell professed her final vows this summer. (Courtesy Dominican Sisters of St. Cecilia)|
As a young girl, Dominican Sister of St. Cecilia Mara Rose McDonnell was spellbound by the mysteries of Catholicism – “Father Dowling Mysteries,” that is.
“We loved watching Sister Stephanie and Father Dowling,” said Sister Mara Rose. “The Catholicity that was in it – we were more interested in that than the storyline.”
The 31-year-old, who made her final profession of vows July 25 at the Cathedral of the Incarnation in Nashville, Tenn., treasured the hints and fragments of Catholicism wherever she found them, and without fully understanding them.
“There was always a mystery around it – a beautiful mystery,” she said of the faith. “You would look at something and think, ‘There’s more there,’ and you would want to know why, and how.”
The hallmarks of the archetypal vocations story – large family, regular Eucharistic adoration, even a consistently Catholic upbringing – are conspicuously absent from Sister Mara Rose’s, whose parents separated when she was 2.
She found that God, however, doesn’t need hallmarks.
While her mother, Nancy Musser, had custody and moved her to Oklahoma and Protestant churches, Sister Mara Rose visited her father, James McDonnell, every other weekend and attended Mass with him at St. John the Evangelist in Frederick. She also visited her maternal grandparents, then parishioners of Holy Family in Middletown.
“My mother’s parents were the rock stars of my Catholic identity,” she said, adding that they were a living example of a “good, holy, Catholic marriage” and plain-old “goodness.”
Her maternal grandfather, Ernest Musser Sr., played an instrumental role in her delayed formation, pulling her and her twin sister aside for a piece of advice: “You don’t need to be Catholic, but you need to find a church you can participate in.”
“I think he knew enough about us that it was a safe bet we would say, ‘Can you sign us up for RCIA?’” Sister Mara Rose mused.
At that point, the girls had returned to Maryland to live with their grandparents, who had also moved – from Frederick County to Washington County – and switched their parish affiliation to St. Ann in Hagerstown.
While a sophomore at Smithsburg High, Sister Mara Rose started the Rite of Christian Initiation of Adults (RCIA); her sister a few years later.
Her grandfather died before she completed RCIA, but Sister Mara Rose did get a chance to thank her grandmother, Cora Musser, in writing, for the model the couple provided.
It would later allow her to answer “Yes” to an insightful question posed by her spiritual director while she was studying at the University of Maryland, College Park, and discerning her vocation.
“Are you sure you’re saying yes to religious life and not just no to marriage?” Father Bill Byrne, a priest of the Archdiocese of Washington, had asked.
Sister Mara Rose teaches middle school religion and civics at Our Lady of Mount Carmel School in Newport News, Va., sharing the Gospel truth that has pursued her from the beginning.
“Truth Himself,” she clarified, “not abstract concepts.”
Her mother returned to the Catholic Church and Maryland – St. Mary in Hagerstown, to be exact.
Nancy Musser said her daughter was always “pleasant, giving and loving.”
“She was fun, but never what I would call a ‘wild child,’” she added.
In high school, Musser said, Sister Mara Rose took up cheerleading because she wanted to “change the opinion people have of cheerleaders.”
“She sure did,” Musser said.
When Sister Mara Rose told her of her vocation, Musser said, she became emotional, but was not shocked.
“I think every parent has the same, ‘Oh my God, you’re taking my baby away’ moment, like for a wedding,” she said. “I had a few crying jags in my own private time, but I soon realized that this is a good thing, and I always knew it.”
Musser said that she has an easy answer for those who express concern:
“Look, I have a daughter who I’ll never have to worry about where she lives, where she works, or who her friends are, and the man she has dedicated her life to will never let her down.”
Sister Mara Rose’s father, who was born in Ireland and retains the brogue, remains a parishioner of St. John the Evangelist in Frederick. He calls his daughter’s vocation “fantastic” and enjoys visiting her when she’s at the sisters’ Nashville, Tenn., motherhouse.
“I get along great with every one of them,” James McDonnell said. “They’re all very nice.”
When Sister Mara Rose announced her plans, he “kind of took a deep breath,” he said, though he soon realized his daughter was doing the right thing for her life.
He has since supplemented his Sunday Mass attendance with EWTN viewing, including rosaries with Mother Angelica “whenever she’s on.”
Also see: Among eight accepted into priestly formation program, two from Cameroon Former dentist finds new joy as Carmelite nun
PrevNext