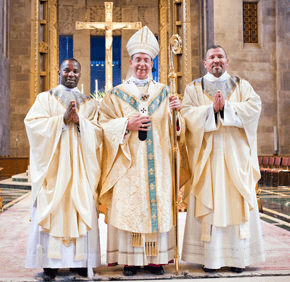 By Elizabeth Lowe
elowe@CatholicReview.org
Twitter: @ReviewLowe
Angel Marrero and Hamilton Okeke, deacons but soon to be priests, were grinning from ear to ear, visibly relaxed and relishing the moment as they processed down the center aisle at the Cathedral of Mary Our Queen in Homeland.
Marrero, 46, and Okeke, 33, natives of Puerto Rico and Nigeria, respectively, were ordained to the priesthood by Baltimore Archbishop William E. Lori June 8 at the cathedral during a two-and-a-half-hour Mass.
Both men were ordained for the Archdiocese of Baltimore. The liturgy represented the culmination of years of training and pastoral work in parishes in the archdiocese.
To view a slideshow of the ordination, navigate the arrows below.
Interested in purchasing a photo? Click here.
In his homily, Archbishop Lori told the men they will be “God’s instruments.”
“We know that the Lord remains with us because of the gift of the Holy Eucharist, which Christ gave the church on the night before he died,” the archbishop said. “This is the reality that will be at the center of your priestly lives each day when you stand at the altar and celebrate the Mass. This is the source and the summit of your priesthood.”
He continued, “Carry out the ministry … with constant joy and genuine love, attending not to your own concerns, but to those of Jesus Christ.”
During the liturgy, the men were presented as candidates for ordination. They placed their hands in those of Archbishop Lori, promising respect and obedience to him and his successors.
In an expression of their total dependence on God, they prostrated themselves on the floor as several hundred faithful chanted the Litany of the Saints.
Archbishop Lori and dozens of other priests laid their hands on the heads of the men, signifying the conferral of the Holy Spirit, an ancient gesture rooted in Scripture. The men were vested with the stole and chasuble, signs of the priestly office.
Their first blessing at the end of Mass was to Archbishop Lori, who announced the assignments for the new priests, Father Marrero to Holy Trinity, Glen Burnie, and Father Okeke to Sacred Heart, Glyndon.
Fathers Marrero and Okeke celebrated their first Masses June 9 at their sponsoring parishes; Father Marrero at St. Michael the Archangel in Overlea and Father Okeke at St. Ignatius in Hickory.
As previously reported in the Catholic Review, Father Marrero, who served in the Puerto Rico National Guard, became a Carmelite brother in 1995 and spent 13 years in the religious community.
With his military background, Father Marrero felt a call to become a military chaplain. He applied for the priesthood program in the Baltimore archdiocese because of its partnership with the U.S. Archdiocese for Military Services, which permits archdiocesan priests to serve as military chaplains. He has begun the process of becoming a military chaplain.
“I’m here to give myself to the church and God,” Father Marrero said after his ordination. “When the archbishop placed his hands over me … it is such a big moment. You feel the Holy Spirit is there and God is touching you.”
“I’m so proud of him,” said Maria Diaz, Father Marrero’s sister. “He’s going to be excellent.”
“He’s an amazing person … who was always looking to fulfill the call. It took him a long time,” said Father Rolando Torres of the Diocese of Bridgeport, Conn., a childhood friend of Father Marrero’s who vested him. “Today you can see the fruits of prayer.”
Efrain Gomez, a parishioner of St. Michael the Archangel, translated from Spanish to English the thoughts of Father Marrero’s parents, William Marrero, 74, and Blanca Rosario, 68.
“He (his father) is very happy,” Gomez said. “She (his mother) is pretty excited.”
A special moment for William Marrero was during Mass “when Angel brought Communion to them,” Gomez said.
Raised in the Igbo community in southeastern Nigeria, Father Okeke became acquainted with the Baltimore archdiocese after meeting Vincentian Father Sylvester Peterka, former pastor of St. Cecilia and Immaculate Conception in Baltimore who frequently visited Nigeria.
Eventually, Father Okeke decided to pursue the priesthood in the U.S.
“I am overwhelmed with joy,” Father Okeke said with a broad smile after Mass. “It is one of the greatest days of my life. What else can I ask for? I am so thankful to God.”
“I’ve never known someone so wonderful like him,” said Obinna Ofili, a family friend of Father Okeke’s from Nigeria, who traveled to the U.S. for the ordination.
“The love I have seen him show and the sincerity – I don’t see how he will not be a wonderful priest.”
“I can’t wait to hear him preach,” said Frank Okechukwu, a parishioner of Sacred Heart, Glyndon, and a native of Nigeria, who literally jumped up and down after the Mass. “So many blessings (come) from this man. He is a man of God.”
Also see:
Baltimore priest to head to Italy for new assignment
Copyright (c) June 8, 2013 CatholicReview.org
PrevNext