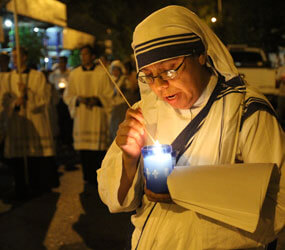 NEW YORK – More than 1,000 people dressed in blue and white filled a cordoned traffic lane across from the Empire State Building Aug. 26 to protest the decision of the building’s owner to deny a request to illuminate the upper floors in honor of the 100th birthday of Blessed Teresa of Calcutta.

The event, organized by the Catholic League for Religious and Civil Rights, featured a melange of local political, religious and entertainment personalities who addressed the crowd from a podium set on the back of a flatbed truck.

Since 1976, the top 30 floors of the Empire State Building have been lit regularly with colored lights to mark national holidays and recognize events as diverse as home team World Series victories, the death of Pope John Paul II, the 60th anniversary of the People’s Republic of China and the DVD release of “The Simpson’s Movie.”

Catholic League president Bill Donohue said his application to bathe the tower in blue and white lights, the colors associated with Mother Teresa’s Missionaries of Charity, was turned down in May without explanation after he was given verbal assurances that it would be accepted. He said he then launched a worldwide campaign to protest the “indefensible decision.”

Donohue said the prohibition on religious figures was added after his request was made.

Several exhorted the polite crowd to chant, “Shame, shame, shame” and “Turn on the lights.”

Deal Hudson, director of operations for the website InsideCatholic.com, said Mother Teresa was “dissed” by New York City, which has a black eye because of the failure to light the building in her honor. “This is an issue of basic human gratitude,” he said. “This is the first U.S. city where Mother Teresa came 30 years ago and (cared for victims of HIV/AIDS), drawing Catholics from all over the region to help and doing it for free, without tax dollars.”

New York City police detective Steven McDonald said Malkin “has not broken any laws, but he has broken many hearts.” The quadriplegic officer, speaking between puffs on a breathing tube, said the failure to honor Mother Teresa was an example of anti-Catholic bias.

McDonald said Malkin missed an opportunity to give back to a city that has made him wealthy. Paraphrasing Scripture, McDonald asked, “What good is it if a man gains the Empire State Building but loses his soul?”

The incongruity of staging a media event to call attention to a notoriously humble and publicity-shy Mother Teresa was not lost on the organizers or the participants.

But Donohue said it was his job to call attention to anti-Catholic slights. “Anthony Malkin made a major blunder here. He stiffed Mother Teresa,” he said.

Meanwhile in the South Bronx section of New York, members of the Missionaries of Charity attended a Mass at St. Rita of Cascia Church marking the anniversary of Mother Teresa’s birth. St. Rita’s, located in one of the poorest neighborhoods of New York, is around the corner from the first convent established in the United States by Mother Teresa.

After the early evening Mass, members of the order led a eucharistic procession around the neighborhood and past that first U.S. convent.

At the Empire State Building protest, “Lifeboat Louis” Menchaca, a Navy veteran with a long, scraggly white beard, wore a hand-painted T-shirt featuring a drawing of Mother Teresa and the legend, “Mother Teresa, we (heart) you – Happy 100th Birthday.” He told Catholic News Service, “I’m here because I love Mother Teresa and I believe she helped me.”

Menchaca, who described his home as a houseboat in the East River, said he treasures two Miraculous Medals Mother Teresa gave him after a June 4, 1997 Mass at St. Anthony of Padua in the Bronx, where sisters were making final vows as Missionaries of Charity.

“She was a woman of great beauty, great courage and great holiness,” he said. “She took care of people regardless of how they looked or smelled. I can appreciate that because I’m not the nicest-looking or best-smelling guy.”

Maureen Fusco attended the rally with other parishioners of St. Sebastian’s in Woodside, in the Queens borough of New York. She said she was there to pay tribute to Mother Teresa as an inspirational model of kindness and mercy.

“In a sense, Mr. Malkin did us a favor,” she said. “The orderly, peaceful demonstration let us call attention to Mother Teresa in a positive way.”

When the Empire State Building’s red, white and blue lights came on at dusk, they honored Women’s Equality Day, the 90th anniversary of the ratification of the 19th amendment to the Constitution, which granted universal suffrage.