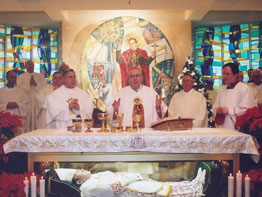 PHILADELPHIA – St. John Neumann, Philadelphia’s fourth bishop who is enshrined in a glass casket under an altar at St. Peter the Apostle Church, was clad in a new set of vestments, just in time for his Jan. 5 feast day.

“It is the bicentennial of our archdiocese and we want to celebrate the holiness of the church in Philadelphia,” said Cardinal Justin Rigali, who oversaw the reverential opening of the saint’s casket and the exchange of the episcopal garb.

“We have a great model of holiness in St. John Neumann and it was thought it would be good if we could put him in new vestments, also vestments that could reflect the period during which he was actually a bishop and in which he lived and died,” the cardinal said.

Bender, a Philadelphia artist, works with federal, state and local law enforcement agencies, and his genius lies in his ability to reconstruct accurately the features of crime victims, often decomposed, to aid in their identification.

His work replicating the faces of fugitives also helps officials envision how their faces may have changed over the years, helping to solve decades-old crimes.

Working from the single photograph of a saint was unusual for Bender, but the skills he needed were exactly the same.

“I’ve never done anything like this,” he told The Catholic Standard & Times, Philadelphia archdiocesan newspaper. “It was definitely the most challenging (assignment) in a spiritual way, and a positive way.”

Bender said that while he was working on the saint’s mask his wife received a cure – which he believes was miraculous.

Last July Janice Lynn Bender was suffering from what was diagnosed as cancer; tests showed it had spread from her breasts to her ribs, lungs and thyroid. The prognosis was so poor she decided to forgo radiation or chemotherapy after a single session.

During that time, the Benders were visited by Redemptorist Father Kevin Moley, the pastor of St. Peter Parish, to discuss the new mask for St. John Neumann. When he heard about Janice Lynn’s illness, Father Moley recited the prayer to St. John Neumann over her, and another priest placed the saint’s relic on her.

Over the next month or so, one by one, the different kinds of cancer she was diagnosed with disappeared.

The doctors told the Benders that previous tests must have been misinterpreted. But Bender finds it absurd that four different tests, conducted at two separate hospitals, would all be wrong. He believes his wife truly had cancer and that medical science had nothing to do with the cure.

In his remarks at St. Peter, Cardinal Rigali recalled that his first visit to the shrine of St. John Neumann was in 1979, when he accompanied Pope John Paul II during the pope’s visit to Philadelphia.

The process this time took more than a year of planning, according to Father Moley. “This was a sacred moment, touching the body of a saint,” he said. “I like the results – you can see the face … reflects the face of St. John Neumann.”

Monsignor George Tomichek, who was born in St. Peter Parish, was present at each of the openings of St. John Neumann’s casket from 1962 on, and it was he who arranged many of the details, including the 19th-century-style vestments handmade in the Philippines.

“I think the results are wonderful,” he said. “The new mask especially looks so real. People are saying it is magnificent.”