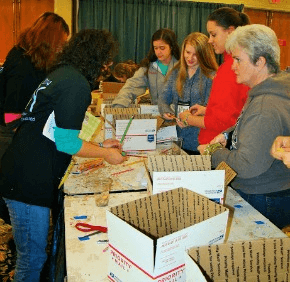 By Elizabeth Lowe
elowe@CatholicReview.org
Twitter: @ReviewLowe
The lacrosse teams from Maryvale Preparatory School in Brooklandville and Mount de Sales Academy in Catonsville have competed in the Interscholastic Athletic Association of Maryland A Conference – despite a handicap.
Now coaches and student athletes at the two schools are ecstatic to have new facilities, most importantly artificial turf fields, saying it changes the game for some of their teams and could even boost enrollment.
Jessica Vitrano Randisi, Maryvale’s lacrosse coach and middle school soccer coach, said the turf “brings us up to date. It makes us more competitive. We have the girls … now we have the facility.”
Terri Moeser, the Lions’ athletic director and softball coach, agreed.
“It puts us up a notch,” Moeser said. “When other teams come for the first time they’re like ‘wow, it’s so nice.’ ”
The turf has “made a huge difference,” according to Maryvale senior Carly Lutz, a varsity field hockey and lacrosse player, who has developed faster stick skills in both sports. “I love it. It’s really nice and it’s going to help many students make their decision to come here.”
Gene Williams, athletic director at Mount de Sales, said the Sailors’ new facility “shows our commitment to moving forward not just athletically, but academically. If there’s potentially a student-athlete on the fence between two schools … (hopefully it) would make a difference.”
“There’s really no comparison” between grass and turf fields, said Mary Gagnon, Mount de Sales’ lacrosse coach. Turf is “extremely important” in the IAAM A Conference, which she called one of the most competitive leagues in the country.
“If you want to stay competitive, you have to have one,” Gagnon said. “We’re more competitive because we’re going to have more practice time available. The girls are happier, too. They love that we have the turf.”
Turf fields allow games and practices to continue in any weather event, barring thunder and lightning. Even snow melts quicker on turf than grass.
With a turf field, Moeser no longer needs to use a broom to push water off the field and Williams doesn’t need to use a drying compound after heavy rains.
“There were years,” Williams said, when “we would use 2,000 pounds of drying compound on the field because of heavy rains.”
Mount de Sales’ athletic improvements, which cost $1.6 million, added a turf field that includes a softball diamond and bleachers. The project was funded through donations and part of the school’s capital campaign.
Construction began in May 2012 and was completed in three months, before fall sports tryouts.
Maryvale’s athletic improvements, meanwhile, include a six lane, 400-meter track, turf field, three practice fields and a grass softball field.
The cost, $2 million, was funded through the “In Her Name” campaign, which honors the memory of Erinn Kathleen McCarthy, a member of Maryvale’s class of 2010 who died in 2007 from a rare form of bone cancer, and all Maryvale women.
The campaign also includes a storm water management system, the reconfiguration of the school’s entrance and the Erinn McCarthy Humanities Hall – a $7 million, 28,300-square-feet building with a 500-seat auditorium, lobby and gallery space, classrooms, music and practice rooms and computer lab.
Construction on Maryvale’s facilities began in summer 2009; turf field construction was complete in April 2012.
While the turf was ready, school officials wanted to ensure student safety as the track was being completed and waited to open the additional facilities, according to a Maryvale spokeswoman. Time was also needed for the grass to grow on the practice and softball fields.
Field hockey and soccer teams began using the field last fall; practice and softball fields have been in use since March.
While Maryvale was without a field, practices were held at St. Paul’s School in Brooklandville and Meadowood Regional Park in Lutherville, among other sites. Randisi said about 40 minutes in travel time is being saved.
“I walk out of my classroom and there’s a field,” said Randisi, an English teacher. “It’s all here now.”
At both schools, physical education classes and teams that may not typically use the field – such as Mount de Sales’ cheerleading team – are on it.
“We want to make the field available,” Williams said.
Baltimore Archbishop William E. Lori blessed Maryvale’s facility April 23. On April 29, Archbishop Lori will bless Mount de Sales’ field and former Baltimore Orioles hall of famer Cal Ripken, Jr. will throw a pitch.
Also see:
Sailors still perfect
Catholic High sophomore’s involvement keeps her on her toes
Copyright (c) April 23, 2013 CatholicReview.org
PrevNext