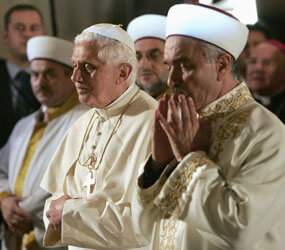 VATICAN CITY – Pope Benedict XVI has kept interreligious dialogue near the top of the Catholic Church’s list of priorities, but his relations with the Jewish and Muslim communities continue to be marked by alternating tensions and new initiatives.

In his first five years in office, the pope has visited synagogues in Cologne, Germany, in New York and in Rome. And he has visited mosques in Istanbul, Jordan and Jerusalem.

But some Muslims still mention with concern remarks he made about Mohammed in a 2006 speech. Some members of the Jewish community remain uneasy with his decision in December to advance the sainthood cause of Pope Pius XII and his decision earlier in 2009 to lift the excommunication of a traditionalist bishop who denied the extent of the Holocaust.

Aside from concern over Pope Pius’ record during World War II, Jewish leaders have a largely favorable view of Pope Benedict and the sincerity of his respect for their faith and their history.

On the eve of Pope Benedict’s visit in January to the Rome synagogue, the city’s chief rabbi said the German pontiff was making an important step along the difficult path of Catholic-Jewish dialogue.

“The visit of a pope to the synagogue should demonstrate that beyond the stumbling blocks there is a substantial desire to communicate with each other and resolve problems,” Rabbi Riccardo Di Segni.

During his May 2009 visit to the Holy Land, Pope Benedict visited the Yad Vashem Holocaust memorial, prayed at the Western Wall – Judaism’s holiest site – and met with Israel’s chief rabbis and with Jewish leaders from throughout the country.

He used his meeting with leaders of the Jewish community as an occasion to reaffirm the fact that “the Catholic Church is irrevocably committed to the path chosen at the Second Vatican Council for a genuine and lasting reconciliation between Christians and Jews.”

As “Nostra Aetate,” the council’s declaration on relations with other religions, affirmed, “The church continues to value the spiritual patrimony common to Christians and Jews and desires an ever deeper mutual understanding and respect through biblical and theological studies as well as fraternal dialogues,” he said.

In evaluating the pope’s work, Jewish leaders appreciate several facts: Pope Benedict explicitly recognizes a special bond continues to exist between God and the Jewish people; he recognizes that for centuries Christians used Jesus’ death as an excuse to denigrate – and even persecute – the Jews; and he understands that the contempt some Christians had for the Jews helped create an atmosphere that the Nazis easily and progressively manipulated to the point of killing 6 million Jews.

Muslim leaders are less clear about where Pope Benedict stands with regard to their faith, although he repeatedly has shown that he wants to keep open lines of communication and promote cooperation on social issues and in social projects of concern to both Catholics and Muslims.

The fact that the pope had taken off his shoes and was standing with his arms folded in the same manner as the imam praying next to him was read by many Muslims as a sign of deep respect and as a gesture that ran directly counter to a speech he had made two months earlier at the University of Regensburg, Germany.

In the Regensburg speech, the pope had quoted a medieval Byzantine emperor, who said the prophet Mohammed had brought “things only evil and inhuman, such as his command to spread by the sword the faith.” The pope afterward clarified that he was not endorsing the emperor’s words and he expressed regret that some Muslims were hurt by the remarks.

In reaction, 138 Muslim scholars from around the world launched an initiative called “A Common Word,” writing to Pope Benedict and other Christian leaders asking for a serious dialogue about values Christians and Muslims hold in common: the obligation to love God and to love one another.

At a meeting with representatives of the 138 scholars, the new Catholic-Muslim Forum for dialogue was formed and it held its first meeting at the Vatican in November 2008.

Addressing the participants, the pope said that professing faith in one God, the creator of all humanity, obliges Catholics and Muslims to respect one another and to work together to defend human rights and help those who are suffering. The commandments of love of God and love of neighbor are at “the heart of Islam and Christianity alike,” he said.

Pope Benedict’s May 2008 trip to the Holy Land brought further rapprochement with Muslim leaders as the pope visited a mosque in Jordan, made a major address to Muslim scholars there and visited the Dome of the Rock in Jerusalem, one of Islam’s holiest sites.

While not grabbing the headlines, the Catholic Church’s dialogue has continued with the world’s Buddhist and Hindu communities under Pope Benedict.

In addition to holding meetings and introducing Buddhist and Hindu leaders to the pope, the Pontifical Council for Interreligious Dialogue sends a message to both communities each year on their faith’s major holiday. The messages have highlighted the possibilities for joint reflection and action on themes dear to the pope, including protecting the environment, promoting development that respects human dignity, the importance of charity and the obligation to educate future generations to respect the religious beliefs of others.