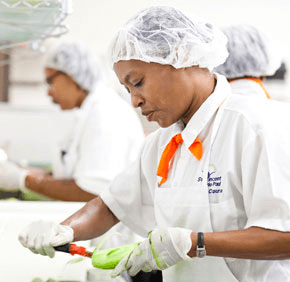 It was lunchtime at St. Francis of Assisi School in Mayfield, and Ryan Lassiter, 10, was trying plantains for the first time.

The fifth-grader’s meal also included sweet and sour chicken, brown rice, sliced apples and milk, for $3 – the same as the burger, chicken nuggets or hot dog the school provided the year before.

Lassiter likes his lunch’s taste and portions, he said. He also said – unprompted – that he appreciates the meal’s nutrition.

“I like how they have different groups like fruit and vegetables, and how it’s all healthy,” he said.

Five years ago, the leadership of St. Vincent de Paul, a Baltimore City-based Catholic charity, began to explore launching a social enterprise – a commercial endeavor that both supports the people it serves and helps to fund its programs.

St Vincent was running two large Head Start programs, where the government requires breakfast, lunch and a snack to be served. Instead of obtaining the meals from an outside vendor, the charity decided to tap into its food service knowledge and become its own food service.

With a focus on highly nutritious meals, St. Vincent launched KidzTable in September 2010 from a Baptist church kitchen.

That fall, through an encounter with the Seattle-based initiative FareStart, St. Vincent de Paul leaders decided to connect the food service training program with KidzTable to give students real kitchen experience.

In January 2012, KidzTable and the training program, now called Next Course, were fully integrated. Now both share a custom-designed space near the intersection of Interstate 95 and Pulaski Highway.

Next Course students often work alongside employees, but are not counted as kitchen staff. Applicants are typically unemployed or underemployed, and often looking for a fresh start, said Laura Spada, St. Vincent vice president for business operations.

The experience gives Next Course graduates an advantage when applying for jobs, Spada said. Twenty-three students have graduated since January. Some now work in food service at local hospitals, schools or universities; others, like Will Johnson, now work for KidzTable.

Johnson, 51, discovered the training program after losing his construction job in 2008 when the economy downturned. He liked to bake – pineapple upside-down cake is a specialty – but the program taught him skills he needed to get a job in a commercial kitchen. After graduation in 2009, he worked for a food service company, but St. Vincent invited him back to help KidzTable expand in its new location.

“We start off with fresh vegetables and fresh herbs and give it some love,” Johnson said of the food.

About 90 percent of KidzTable clients are in Baltimore’s “food deserts” – parts of the city lacking access to fresh produce. Such is not the case for students at St. Francis, but for some children, the food that comes from KidzTable may be the only healthy meals they eat, Spada said.

The results have surprised Carol Ciuchta, St. Francis’ administrative assistant. She never expected kale to go over well with elementary students, but some asked for extra.

The only meal that foundered at the school was baked fish with squash, but others – especially the turkey tacos with fresh salsa – have been a success. About 40 of St. Francis’ 220 pre-kindergarten to eighth-grade students sign up for KidzTable daily (others bring lunch), but Principal Rebecca Malone expects that number to grow.

Ryan’s dad, Tom Lassiter, 45, said KidzTable has taken guess-work out of preparing healthy meals, and he is glad his son likes it.

“We’re really happy with it,” he said.