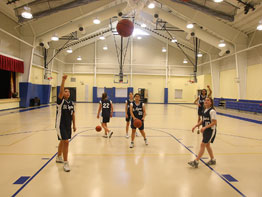 The pastor of Catonsville’s St. Agnes and its elementary school principal watched as the eighth grade girls’ basketball team became the first group to use the new $4 million parish center.

The team marveled at the spacious gymnasium as they tried to concentrate on practice. Their own giddiness was hard to disguise.

“This is great, they can finally do this at their own school,” Mrs. Banks said. “Before, they always had to go other places and (pay) rent for games, practices and tournaments. This is unbelievable.”

It’s a visionary building that features a wide stage for performances, a large classroom, gym bleachers that seat nearly 200 and a restaurant-quality kitchen. The parish previously featured a room too small for most gatherings. Now large visions of crab feasts, bull roasts and basket bingos can be realized.

“When you have a bright, open place like this,” Father Cummings said, “people are going to want to come.”

The center is a stunning addition to the campus and a new landmark for Edmondson Avenue.

“We’re looking at is as an opportunity to re-energize the parish,” Father Cummings said. “It will help attract new students to the school. They want everything: music, band, art, language. They want all the bells and whistles. This is all pretty much state of the art.”

The entry way of the building features a statue of St. Agnes alongside an area for trophies. Blue tiles just inside the doorway symbolize waters of grace guiding visitors. Basketball backboards descend from the ceiling, making them available for younger parishioners.

Potential students and families will get their first chance to experience the ‘wow factor’ of the parish center Dec. 9 in an open house at the school from 9 a.m. to 2 p.m.

“It’s a dream come true,” she said of her team’s new home. “We look forward to having a year-end tournament here.”

Last-minute construction touches are still being applied. The parish center ix expected to open for general use at the start of year.

The parish had saved over $1 million for the project prior to its inception, Father Cummings said, and was able to raise another $1.5 million through a capital campaign effort. In the last four or five years, another $750,000 has been accumulated.

Plans for the center began about six years ago, coinciding with Father Cummings’ arrival at the parish. Work on the master plan, land surveys and graphic studies all were done to satisfy government requirements and parish expectations.

The parish rectory was knocked down to make way for the new center. Father Cummings said he was happy to give up his on-campus home so parishioners could have one of their own.

“A place like this,” he said, “can transcend the whole spectrum of the parish – the young, middle-aged and the old. It’s something everybody will feel comfortable in sharing.”

St. Agnes will hold an Open House for families and potential students Dec. 9, from 9 a.m. to 2 p.m.