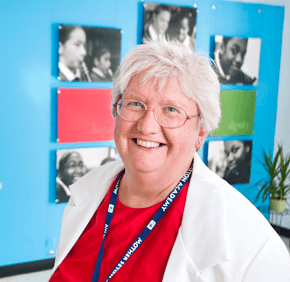 By Elizabeth Lowe
elowe@CatholicReview.org
School Sister of Notre Dame Margaret Anne Juskelis, known as Sister Peggy, is the new president of Mother Seton Academy, a tuition-free middle school in Baltimore sponsored by the School Sisters and five other congregations.
Sister Peggy succeeds School Sister of Notre Dame Charmaine Krohe, who was president for five years before joining the order’s provincial council.
Mother Seton Academy has 74 students, a figure Sister Peggy said the school is “very pleased with.”
“We’re looking forward to increasing the enrollment in years ahead,” Sister Peggy said. “We’re in the process of growth and development.”
The school is “looking to (an) expanded partnership” with Maryland Institute College of Art and NASA’s Hubble Space Telescope project, said Sister Peggy, who noted these partnerships “broaden their (students’) horizons. Education is more than what we learn in our textbooks.”
She is working to “deepen my relationships with our long-standing benefactors to make sure people in the Baltimore area know what a treasure Mother Seton Academy is,” said Sister Peggy, who added she wants to “spread the good news of what we’re doing for the children of this school.”
Sister Peggy was provincial counselor of the School Sisters of Notre Dame Atlantic-Midwest Province from 2006 until June.
She is no stranger to Baltimore.
Sister Peggy taught at the Institute of Notre Dame in Baltimore from 1977 to 1978 and 1988 to 1997; at Bishop Walsh School in Cumberland from 1979 to 1984; was dean of students at IND from 1992 to 1997; and assistant principal and a teacher at The Seton Keough High School in Baltimore from 1997 to 1999.
She taught at the former Cardinal Gibbons School in Baltimore from 1999 to 2005, was director of faculty and staff development there from 1999 to 2003 and vice principal for academics from 2003 to 2005.
She earned a bachelor’s degree in mathematics and a certificate in administration from Loyola University Maryland in Baltimore and a master’s degree in mathematics from The Ohio State University in Columbus, Ohio.
Copyright (c) Sept. 24, 2012 CatholicReview.org
PrevNext