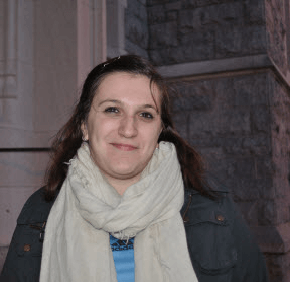 By Maria Wiering
mwiering@CatholicReview.org
Twitter: @ReviewWiering
“They’re calling him ‘The Pope of Small Gestures,’ ” Agostina Turchetti whispered during Mass.
“They” were her friends from Buenos Aires, her hometown. Her Facebook feed was full of photos they were posting of Cardinal Jorge Mario Bergoglio, their archbishop until March 13, when he was elected pope.
One of the shots showed him playing with kids at a children’s hospital. Another showed him washing a woman’s feet. These, Turchetti said, are the “small gestures” her friends are talking about.
Like 26-year-old Turchetti, many of her friends know their former archbishop, now Pope Francis, from his day-to-day ministry in their city. He took public transportation to work (one photo on Turchetti’s Facebook wall showed him on the subway), making him a regular presence in Buenos Aires streets. He spent time among the poor, in hospitals and ministering to people with HIV.
He confirmed Turchetti and her classmates in 2001, and was a regular guest at meetings of their missionary group that took the Gospel to under-catechized regions of Argentina. Turchetti’s conversations with him were limited to greetings. “I was very shy,” she explained.
He nonetheless profoundly influenced her faith, she said.
A Baltimore resident since 2009, Turchetti is a member of Sacred Heart of Jesus-Sagrado Corazón de Jesús in Highlandtown, where she sings in the choir and participates in the youth group.
She was working when she heard Cardinal Bergoglio had been elected the 266th pope.
“I’m so excited,” she said. “When I got the text message that it was him, I started to cry. I wanted to leave the office and scream. Seriously, I think he’s meant for that (the papacy).”
Turchetti stopped going to church when she was young. Her mother was not religious, she said – not uncommon in a country where 89 percent of its citizens identify as Catholic, but only 21 percent attend Mass weekly. In high school, Turchetti’s friends encouraged her to return to church, and she decided to be confirmed.
“I remember the day of my confirmation, that (Cardinal Bergoglio) said it was a personal choice, that we were choosing God,” she said. “He said that you’re becoming adults in a way, and now that you’re confirming your faith, you have to follow it and continue it. That’s why I’m here. … When you hear someone talk about how he feels and giving to others, you just want to do the same.”
Pope Francis became archbishop of Buenos Aires in 1998 after serving as an auxiliary bishop there since 1992. Before that appointment, he was superior of the Jesuit province of Argentina and later taught at a Jesuit school.
Pope Francis, now 76, is a “simple man,” Turchetti said. He did not use the archbishop’s limousine, or have housekeepers or a cook.
“He used to be with the people all the time,” Turchetti said. “He likes talking to everyone who approaches him, especially young people. He reminds me of Pope John Paul II.”
He is always happy, but reports that he rarely smiles are true, she said. She was surprised to see him grin while standing on the balcony of St. Peter’s Basilica in Vatican City.
Although he is a public figure, Cardinal Bergoglio has avoided the media spotlight, Turchetti said. He prefers talking to people one-on-one or in small groups, like the youth missionary group she was part of. He would sit and drink mate, a traditional South American tea-like beverage, with them during their discussions, he said.
“He just wanted to know what we were doing and how we feel,” she said.
The group peppered him with questions about his vocation and serving others.
“He said that it was all about love, basically. He talked about it a lot – about love and helping,” she said. “When you’re 14, you’re just looking for someone to follow as an example. What I loved the most is that he was very simple and he talked about that you just need to love the other person. It doesn’t matter if you know him or not.
“I was like, ‘Wow.’ I needed something like that,” she said.
Turchetti expects Pope Francis to be a “very caring pope, especially with young people.”
It did not surprise her to see him bow for people’s prayers before he blessed those gathered in St. Peter’s Square March 13. He often asked for the Argentinians’ prayers, she said.
“Latin American people are very warm,” she said. “That will help a lot for our church. With everything that’s been happening, we’ve kind of lost that warmth in some places.”
Pope Francis is also a “fighter,” Turchetti added. She said he took stands against the Argentinian government on issues such as abortion, which is legal in the country.
The cardinal’s elevation to pope means that he will be absent on the streets of Buenos Aires, but Turchetti said his election is not a loss for Argentina.
“It’s all gain,” she said. “We’ve been following him for years and years. Now it’s not only us. I think he’s a great person. You can see God’s presence in him. Now we can share that with the whole world.”
Also see:
U.S. cardinals describe Pope Francis as ideal choice for modern times
Archbishop Lori impressed by new pope’s concern for the poor
Text of Pope Francis’ remarks from the balcony
Pope Francis starts first day with Marian prayer
March 14, 2013 CatholicReview.org
PrevNext