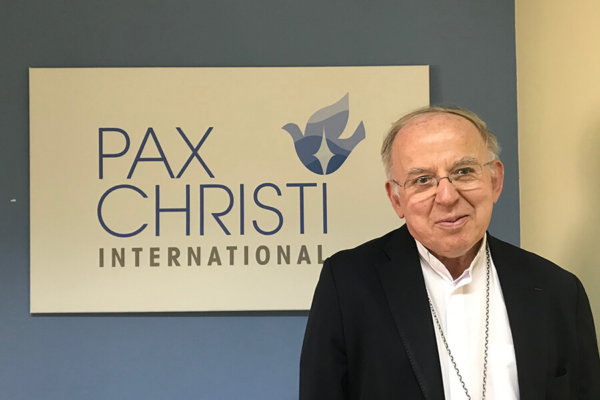 WASHINGTON (CNS) — Pax Christi International has two new co-presidents and while they hail from different continents, they share the view that rampant violence is posing ever-growing danger to the world.

Loreto Sister Teresia Wamuyu Wachira of Nairobi, Kenya, and Bishop Marc Stenger of Troyes, France, open their three-year term hoping that the organization can boost training in nonviolence, especially among young people. They see such training as necessary so that eventually dialogue and communication become the prime options to resolve differences rather than the use of hateful words, physical attacks and even warfare.

“Nonviolence is very, very important,” Sister Wachira told Catholic News Service from Kenya. “We have to try. It may take a long time and we may be going against the grain, but I believe we must move in the right direction.”

Bishop Stenger wrote in an email that the organization “can open avenues and provide guidance for promoting sustainable peace through nonviolent strategies.”

“It can do this,” he explained, “in connection with the infrastructure available to the church at all levels — universities, seminaries, dioceses, etc. — stressing the social teaching of the church, always to be read in the light of the Gospel.”

While starting their term during Pax Christi International’s annual general meeting June 26-27 in Brussels, the co-presidents had yet to formally meet face-to-face. Sister Wachira was unable to attend because of visa issues. But both said they have talked via online video conferencing and were eager to move forward on the organization’s priorities addressing nonviolent alternatives.

Both peace leaders have promoted nonviolence in their ministry roles. Sister Wachira has been a teacher and principal in Loreto-run schools in the East Africa nation, concentrating on training young women for peacemaking and reconciliation work.

She also advises her congregation’s office at the United Nations in New York on the role of peacemaking in the world’s trouble spots.

Bishop Stenger for years has written on nonviolence and the importance of building a culture of peace in local communities. His involvement with the Catholic peace organization dates to 1999, when the French bishops’ conference proposed he become president of that country’s Pax Christi body.

The bishop also has addressed the precarious situation of Christians in Iraq, and after a 2002 visit to Colombia, which then was in the midst of a long-running civil war, he called on all parties to respect human rights in order to achieve peace.

In his email, the bishop expressed concern that the world’s nuclear powers are seeking to expand their nuclear weapon arsenals after decades of reductions. Plus, he said, the widening distribution of conventional arms is destabilizing societies and increasing injustice in many nations, causing people to flee for safer lands.

Bishop Stenger has been a leading voice in the French church on the role of people of faith stepping up to protect the environment. He has repeatedly called for strong global action to address climate change.

“Everything is connected,” he said in his email, referencing Pope Francis’ encyclical “Laudato Si’, on Care for Our Common Home.”

Because of such challenges, both leaders said, Pax Christi International can play an important role in easing the downward spiral toward conflict, violence and injustice.

“I believe Pax Christi is one of the organizations that can effectively work for change in society,” Sister Wachira said.

Bishop Stenger said the church’s worldwide presence gives it the opportunity to share new strategies to replace policies that have failed to achieve justice for all people, especially the poor and vulnerable.

“An effective peace movement can be built in the church if everyone is involved and if we give the first place to local actors who are best able to measure situations,” he explained to CNS.

“To motivate people to act and advocate, we must show them the challenges of the future in a clear way and make each Catholic discover that the commitment to peace is a missionary responsibility,” he said.

Bishop Dowling turned 75 in February and under canon law had to submit his resignation to Pope Francis. No action has been taken on naming a successor, however.