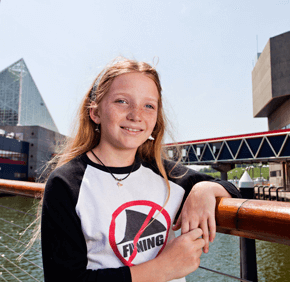 By Maria Wiering
mwiering@CatholicReview.org
Twitter: @ReviewWiering
SEVERNA PARK – On May 2, Gov. Martin J. O’Malley signed into law a bill prohibiting the possession of shark fins in the state. Standing beside the governor and State Sen. Brian E. Frosh (D-Montgomery), who sponsored the legislation, was 10-year-old Keegan Taylor, whose activism helped to push the bill to passage.
A fourth-grader at St. John the Evangelist in Severna Park, Taylor fell in love with sharks a few years ago after watching the Discovery Channel’s Shark Week.
She used to be afraid of sharks, she said, but the documentaries changed her mind. She was struck by how many sharks are killed each year: tens of millions, according to Humane Society International.
“I realized they should be more afraid of us than we are of them,” she said.
A parishioner of St. Casimir in Canton, Taylor became avid reader of all things sharks, and their images decorate her bedroom. She owns the 1975 thriller “Jaws” and its three sequels. Her memory is a storehouse of statistics, a helpful resource when her preoccupation morphed into a cause.
“I don’t think finning sharks is right, and I wanted to do something about that,” she said. “I want to make this a law everywhere.”
Maryland’s new law prohibits a person from possessing, selling, trading or distributing shark fins.
Shark fin soup is considered a delicacy in some Asian cuisine, and the crucial ingredient is often acquired by fishermen capturing a shark, stripping its fins – called “finning” – and tossing the disabled shark back in the water, where it inevitably dies, Taylor said.
She compares it to a person having their arms and legs cut off and left in the street.
Anti-finning activists are concerned that the overkilling of sharks could lead to a dearth in the ocean’s ecosystem and result in the loss of other species.
The anti-finning bill was first introduced in the Maryland General Assembly last year, and Taylor wrote letters of support. It passed the Senate but not the House. When Sen. Frosh introduced the legislation again this year, Taylor decided to testify in person.
She spoke before House and Senate committees. Del. Eric G. Luedtke (D-Montgomery County) sponsored the legislation in the House.
Frosh said he has seen young people engaged in issues before, but not to Taylor’s level.
“She was a very committed, persistent advocate,” he said. “It was really interesting that a person that young was committed to an issue. I thought that was extraordinary.”
Maryland is the first Atlantic state to pass the ban. It joins California, Hawaii, Oregon, Washington and Illinois in outlawing shark fin possession.
Taylor connects her activism with Catholic principles she has learned at school. “God made every creature on earth, and he doesn’t want us to hurt them either,” she said.
She said she also learned about ecosystems in science class and “how everything depends on everything.”
“We do a lot of environmental education with the children,” said Sister of St. Joseph Linda Larson, St. John the Evangelist’s principal.
Students care for a diamondback terrapin hatchling from the Baltimore’s National Aquarium, visit the Smithsonian Environmental Research Center in Edgewater and raise spat, or baby oysters, which are placed in the Chesapeake Bay.
Advocating for the bill taught Keegan as almost much about the legislative process as shark finning, said her mother, Maura Taylor.
“It’s great that the bill passed this year; it’s a nice early lesson that if you advocate for something passionately that you believe in, that it can work, and now we have a law,” she said. “I hope that she will continue to advocate for the things she believes in.”
Keegan aspires to become a marine biologist. Until then, she’ll continue to spread her message.
“Sharks are important. Sharks do matter. They mean something to all of us,” she said.
Also see:
St. Mary’s alumna named new horse-racing analyst at Pimlico, Laurel Park
Copyright (c) May 17, 2013 CatholicReview.org
PrevNext