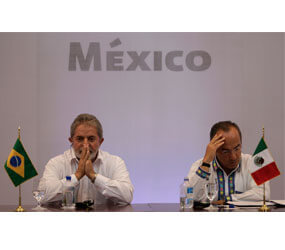 MEXICO CITY – Simon Bolivar, known as the Liberator of the Americas, dreamed of a united Latin America, stretching from the Northern Mexico to Tierra del Fuego. He is credited with winning independence of at least five South American countries in the early 1800s. And he remains revered in those countries and much of Latin America – especially in Bolivia, which is named for him, and Venezuela, where president Hugo Chavez rechristened the country, “The Bolivarian Republic of Venezuela.”

But he failed in his attempt to form a unified Latin American entity and ultimately saw his attempts as futile. On the eve of his death, he reputedly uttered the bitter lament, “America is ungovernable. Those who have served the revolution have plowed the sea.”

Some 200 years later, his dream lives on.

Presidents and prime ministers from Latin American and Caribbean countries met Feb. 22-23 for a unity summit in Playa del Carmen, Mexico, where they proposed the creation of a new hemispheric group of nations that would include Cuba and exclude the participation of the United States and Canada.

The new Latin American and Caribbean Community aims to achieve greater economic and political integration among countries that share historical, religious and cultural ties, along with a frequent distrust of and dependence on the United States.

It would replace a regional bloc of Latin American and Caribbean nations known as the Grupo del Rio and be a counterweight to the Organization of American States, which political observers say has been dominated by the United States throughout its history and excludes Cuba.

With the goal of promoting regional integration, Bolivar’s name was frequently invoked at the summit.

“That was the dream of Bolivar, one of a single American nation, united in the values of democracy, justice and equality,” Mexican President Felipe Calderon said at the summit’s inauguration.

But the challenges for integration are enormous as some Latin American and Caribbean nations are pursuing increasingly disparate political paths and regional conflicts over issues such as borders and trade persist.

The governments of Venezuela, Bolivia and Ecuador, for example, have veered sharply to the left over the last decade. Mexico and Brazil, meanwhile, have pursued more moderate courses and Chile recently elected a right-wing government.

Relations between some nations are strained. Venezuela and Colombia have partially suspended relations in recent years, while Bolivia and Chile have long been at odds over landlocked Bolivia’s claims to coastal territory in Chile.

Outgoing Costa Rican President Oscar Arias sounded the alarm at the summit over increased military purchases by countries such as Brazil and Venezuela and the persistence of authoritarian governments.

Given the differences and a history rife with disunity, many political observers are skeptical the new group will achieve its stated objectives.

The idea of integration “goes back to Bolivar and has always failed,” said Ilan Semo Groman, political historian at the Jesuit-run Iberoamerican University in Mexico City.

Church officials in Latin America have responded favorably to the summit and its goals, however.

In a statement released Feb. 24 by the Mexican bishops’ conference, Bishop Felipe Arizmeni Esquivel of San Cristobal de las Casas said the church’s hopes for regional integration date back to at least 1979 and the Third General Conference of the Latin American and Caribbean Bishops’ Conference.

“Recognizing that Latin American communities have so many values, needs, difficulties and hopes in common, there must be a legitimate integration promoted that overcomes narrow nationalism and self-interest and respects the legitimate autonomy of each community, their territorial integrities, etc., and promote the self-limitation of military spending,” the bishops said in 1979.

Bishop Arizmendi went further, however, with a call for Latin American countries to stop looking to the North and to Europe and instead focus on the South.

But breaking such tendencies could be difficult because factors such as the enormous migration toward the North and increased economic activity between the United States and Canada and the countries of Latin America and the Caribbean.

“The South is something that appears as a great dream in which we’re similar … and they’d understand us better. But it’s all rhetorical.”

The rhetoric on that topic – and others – was thick at the summit in Playa del Carmen, along with anti-American sentiments.

The leaders issued a statement demanding Great Britain relinquish sovereignty of the Falkland Islands – known locally as the Malvinas – to Argentina, for example.

“Queen of England, I’m talking to you,” Chavez said at the summit.

“The time for empires is over, haven’t you noticed? Return the Malvinas to the Argentine people.”

Another statement called for the United States to lift a decades-old blockade of Cuba.

Expressions of solidarity also gave way to conflict at the summit. For instance, Chavez and his Colombian counterpart, President Alvaro Uribe, exchanged terse words and insults.

Such exchanges have been common at Latin American summits, Semo said.

“It’s a space for symbolic confrontation,” Semo said. “It happens every summit.”

It remains to be seen if the nations of Latin America actually achieve unity or continue fulfilling Bolivar’s bitter lament.

Semo expressed doubt the initiative would flourish, but he said groups with a more regional focus such as Mercosur, a South American trading bloc, could find some success. The emergence of Brazil as an economic power also is promoting hopes that countries in Latin American can lessen their dependence on the United States by finding a large, alternative market.

But moving away from the United States could prove difficult – if not impossible.

“This idea of looking south never transforms into something concrete,” Semo said.

“The relations (these countries) have with the United States are often more powerful than the relations they have with each other.”