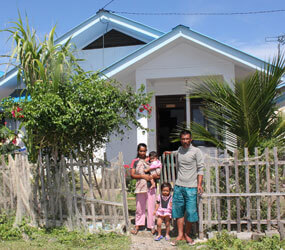 BANDA ACEH, Indonesia – Squatting inside his small home in the fishing hamlet of Alua Naga near the city of Banda Aceh, Hussein Sweid knitted together a fishing net, preparing for his next venture out to sea.

“This is a new life and I am slowly coming in terms with it,” Sweid, 45, said, surrounded by his family: a wife of four years and two daughters, both now almost 3 years old.

Tears welled up in his eyes as he recalled how he lost four of his five children and first wife in the Dec. 26, 2004, tsunami when the sea rose up to 38 feet, submerging much of westernmost Indonesia’s island of Sumatra.

“Only my (10-year-old) daughter survived because she was with the grandparents (in another city) at the time,” Sweid said.

Sweid himself survived only because he was at sea fishing with his brother. Their boat was swamped and both men were swept ashore by the giant wave. Sweid was among the fortunate; 75 percent of Alua Naga’s 3,000 inhabitants were swallowed up by the monstrous tsunami.

A lifelong fisherman, Sweid lived in a temporary shelter for nearly five years while his sole surviving daughter remained with his deceased wife’s parents. He said he had lost hope of getting into a home he could call his own.

Catholic Relief Services then stepped in, offering him a house in 2009.

“We are very happy now,” said Sweid, walking to the home’s wooden gate, with his wife, Nurhiati Ibrahim, whom he married in 2007, by his side. A lush coconut tree on the family’s small plot symbolized his new life.

The small but serviceable home was among 129 that the U.S. bishops’ relief and development agency built in Alua Naga. Maulia Sabrina, a former field worker for CRS, said the agency built thousands of houses in two dozen villages throughout Aceh province.

Sweid, a Muslim, was happy to be a beneficiary of the agency’s redevelopment work.

Christians are a small minority in the overwhelmingly Muslim province. They include about 7,000 Catholics among the 5 million inhabitants.

CRS has built more than 4,000 permanent houses from 430 to 550 square feet in size for tsunami victims. Made of brick, they were specifically designed to minimize heating in the hot humid Sumatran air.

A few houses are unoccupied though as lone survivors moved out, seeking refuge with family members elsewhere.

“In some families, there are only lone survivors,” she explained. “They are living with cousins and staying in rented houses in the city instead of living alone in the villages.”

Rahima Jaffar is one such survivor in the village of Gampon Lamlumpu, seven miles from central Banda Aceh. She was working as a maid in Malaysia when the tsunami destroyed much of the village. But she wanted to return home and eventually received one of the CRS-built houses.

“I lost my parents, brother and sister,” recalled Jaffar, who moved with her husband and three children into her home in 2008. She said she is grateful to CRS for a new start.

Others were not as fortunate. Jaffar pointed to the home of a neighbor and childhood friend, Faryendsha Abdul Latif, who had lost her two children in the disaster.

“She is not there,” Jaffar said. “She is yet to recover from the shock and is staying away in a rented house.”

Still, most residents in the villages are grateful for the new start and the comfort of a new place to live as the recover from the disaster.

The houses are just one part of the recovery efforts coordinated by CRS. Adhering to a request from the Aceh reconstruction authority, CRS renovated a dilapidated government-run hospital, which struggled to care for tsunami victims.

A $3 million four-floor addition has turned the outdated and inadequate maternity hospital with a handful of beds into a specialty facility with more than 60 beds offering multiple disciplines.

“It is very helpful and the patients are very happy with the facilities,” said Rosi Susanti, the hospital’s head nurse.

Apart from rebuilding the hospital and the housing, CRS also repaired or built more than 250 culverts and bridges, cleared land, renovated markets and built small community clinics and village halls.